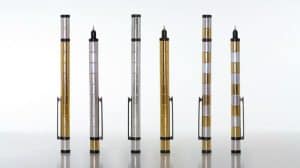 Innovative pens tend to do fairly well on rewards-based crowdfunding web sites like Kickstarter, and the Polar Pen is no exception. The “world’s first modular pen made from magnets” has raised CAD $700,000 with a week left in the campaign.

To be fair, this pen does a bit more than write. The entire pen is made of rare earth magnets, which means it is customizable. Think pens and styluses meet Bucky Balls.

The pitch video (embedded, below) shows some of the crazy things you can do with the pen…

This modular pen will inspire you at work, school or home. If you enjoy tinkering with things or are fascinated with the power of magnets, then this product is for you. We have found many fun and functional ways of using the POLAR Pen and we are really excited to see what you will come up with.

Polar pens are available in silver or gold finishes, and yes, that is real silver and gold plating. The silver pens are actually said to occasionally tarnish, but silver polish can restore their original condition.

Because of their modularity, there are a slew of reward levels available that encompass all sorts of configurations: just a pen, pen and stylus, just a stylus, pen + stylus + more magnets to make cool things, etc.

Thus far over 12,000 backers have pledged funds to the campaign. Funds will go to the first production run of the pens, which are assembled and manufactured in part in Ontario. The rare earth magnets come from China. As the campaign page explains, “China has created a near monopoly on the global deposits.”

With 6 days left, this will likely be the most-funded campaign in Kickstarter Canada’s short history.