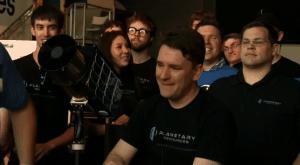 Planetary Resources famously raised over $1.5 million for the ARKYD satellite on Kickstarter. The project plans to eventually launch a publicly-accessible space telescope that will allow anyone to take a picture from space.

The campaign hit a handful of stretch goals after raising well over their stated $850,000 goal. The third stretch goal hit was for a partnership with Zooniverse, which touts itself as “home to the internet’s largest, most popular and most successful citizen science projects.” The partnership was described as follows…

We will now team with Zooniverse to develop a platform that will allow YOU to find asteroids at home, and help train computers to better find them in the future!

That partnership is now coming to fruition in a partnership that will not only include Zooniverse’s participation, but also the participation of NASA. The goal of the project is to “design and implement crowdsourcing algorithm challenges in the effort to detect, track and characterize near-Earth objects (NEOs).”

The project will afford the everyday space enthusiast an opportunity to play a vital role in an important mission. It also stands to help Planetary Resources in a big way. The company has its sights set on mining asteroids for precious minerals and resources, the economics of which are staggering. In 1997 it was estimated that a one-mile diameter metallic asteroid contains as much as $20 trillion worth of precious metals. This project can help Planetary Resources meet the goal of mining space for vital resources that we’re running out of here on Earth.

“Our mission is to mine asteroids for precious resources, but we uniquely understand the crowd’s interest to be actively involved in space exploration. And, we are always seeking new and innovative ways to increase our knowledge of NEOs, especially those that may be potentially hazardous,” said Chris Lewicki, President and Chief Engineer, Planetary Resources, Inc.