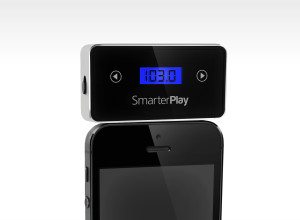 Coming from our friends in Australia (Glen Innes to be exact) is a crowdfunding campaign on Indiegogo which raised 50% of its goal in only 8 hours.   SmarterPlay, created by Australian entrepreneur Brendon Watson plays music from a mobile phone to any FM stereo. For those of you lacking Bluetooth connectivity in your car, this may be the way to go for smart phone users.

Watson, the developer of SmarterPlay says that he chose to list his innovation on crowdfunding platform Indiegogo for its flexibility, wide international following and longer standing support of Australian innovators than other crowd funding sites.

“We had been watching Indiegogo for some time, and are a big fan of the way it promotes innovation and rallies together supporters. We are excited to bring our product to market before Christmas and anticipate delivery early next year,” he said.

Watson continued to explain that rather than seeking support fro venture capital funds, he preferred funding from the crowd with lots of small pledges. Product owners are able to keep 100% ownership of their work and in return supporters are given perks such as early or special editions of the product.

In the case of SmarterPlay, which is an Australian developed product, Brendon Watson says that using Indiegogo has been an excellent way to get it noticed globally.

“We are honoured to be one of the first Australian products to list on Indiegogo, and look forward to sharing the journey of the SmarterPlay product development with this exceptional online global community,” he said.

“Crowd funding gives product innovators like me a chance to put their product out there, and in a very democratic way gives the public a chance to rally behind and support a product that the believe in, as well as sharing in the whole excitement of being part of a great idea become reality,” he said.

The crowdfunding campaign runs through January 13, 2014.  The early bird offering is for $35 with global shipping included.  The campaign hopes to raise at least $20,000.