Israel based, global crowdfunding platform OurCrowd has scheduled a series of events as part of their ongoing initiative to share the benefits of participating in their accredited investor platform. OurCrowd, one of the largest platforms of it’s kind in the world, has aggressively marketed their service to both investors and quality companies seeking to raise capital.

OurCrowd and its investor community has invested over $35 million in 33 companies as of the end of 2013.  By some estimates the platform is on track to surpass over $100 million by end of 2014. 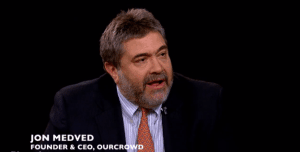 The equity crowdfunding platform has a highly selective process reviewing hundreds of business plans but only selecting a few.  Some companies will also receive funds directly from the platform as OurCrowd occasionally  participates directly in their listings.

Founded by Jon Medved, OurCrowd stands as one of the fastest growing equity crowdfunding sites in the world.  Medved, a noted entrepreneur, has directly invested in many Israeli companies helping 12 of those companies grow to valuations in excess of $100 million.