Earlier this week, WobbleWorks, the creators of famous 3D pen 3Doodler, debuted its second generation during a new crowdfunding campaign on Kickstarter. Seeking to raise only $30,000 for the new device, the startup has already received $410,000 thanks to nearly 3,100 backers. Now the WobbleWorks team has announced a new accessory will be added to the device’s package. 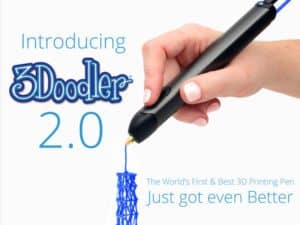 As previously reported, Doodler’s brand new model has been completely redesigned from tip to toe after more than two years of research and development. More efficient, quieter and sleeker than the original 3Doodler, at 50 grams the 2.0 pen is less than half the weight of an apple. Its stylish aluminum casing gives the pen a more premium feel, alongside internals that include a re-engineered drive system and an entirely new nozzle design.

The new enhanced airflow, which uses a patented fan system, cools the plastic even more efficiently and quietly, while the dual speed control provides perfect precision over your creations. The new JetPack accessory, a portable power pack for Doodling on the move, and one of four new accessories being released for 3Doodler 2.0, allows for over 3 hours of non-stop Doodling with PLA plastic, and over 2 hours with ABS.

Compact and easy to use, the 2.0 pen allows you to literally draw in the air by extruding heated plastic that cools almost instantly into a solid, stable structure. Whether freestyle 3D sketching or tracing shapes from templates to make larger architectural structures, the 2.0 pen allows artists, designers, geometrists, hobbyists, teachers, and architects to test out their ideas quickly and easily.

Key features of the 3Doodler 2.0 include:

Many of you have also written asking about new plastics we have coming for the 3Doodler. We had originally planned to release exciting FLEXY DoodleStrands later in the year. But to say a big thank you, we’re speeding up production and will be including a free packet of our new FLEXY DoodleStrands with every 3Doodler 2.0! 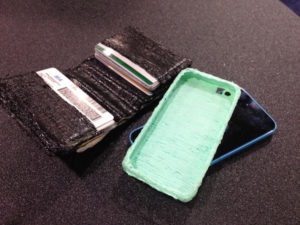 FLEXY is the first of a series of new materials we’ll be releasing this year, and it’s also one of our absolute favorites. In beta testing we’ve been using FLEXY to make flexible iPhone cases, wallets, jewellery, textiles, cute keepsakes and rubbery models (as well as slingshots)!

Each packet will have x25 strands of FLEXY in the awesome colors below. These were originally slated for production in the spring, but we’ve pulled things forward to get this awesome new plastic to you with your 3Doodler 2.0!

3Doodler’s crowdfunding campaign is set to close on January 25th!