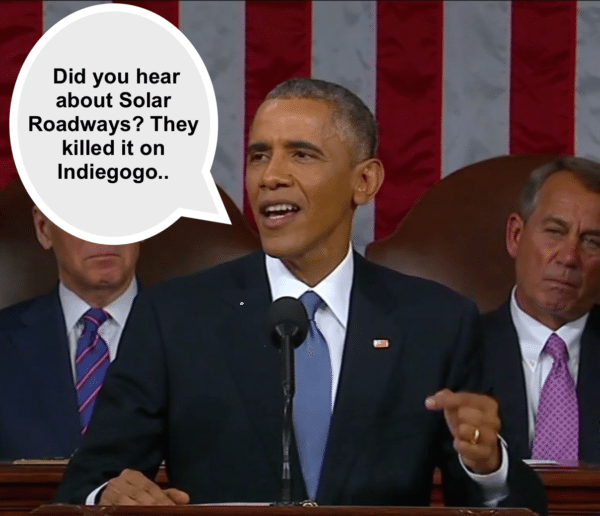 Successfully funded Indiegogo campaign Solar Roadways received the Presidential Seal of Acknowledgement yesterday during the State of the Union Speech by Barack Obama. Regardless of which side of the fence you sit, it isn’t bad to be mentioned on a public broadcast viewed by millions.

Solar Roadways raised over $2.2 million crowdfunding on Indiegogo last summer and set a record for the number of backers as almost 50,000 supporters pitched in.

Congratulations to Indiegogo-funded @SolarRoadways on their mention in President Obama’s State of the Union address pic.twitter.com/cHrj7S3jM7

Solar Roadways (if you were not aware) are solar panels that may be used as tiles for roads or walkways. So they perform a duel duty of paving the way while capturing sunshine to generate electricity.  The concept has generated quite a buzz. The startup was chosen by Popular Science as one of the 100 Greatest Innovations of 2014 and creators also received a trip the White House as part of the Makers gig last year.  As for when you will be able to park your car in a lot paved with Solar Roadways beneath your tires?  That date remains uncertain but the Solar Roadways site states sometime this Spring things should start moving forward.