Not only do I get the chance to embed some really cool animated Gifs but I get to let you know that Giphy is open for investors right now.  Crowdfunding via Alphaworks, if this offer is like the other ones it will subscribe very quickly – so you better hurry.

For accredited investor types, this is an offer to participate in a funding round alongside Lightspeed Ventures who just led sizable $17 million funding round that saw Giphy’s valuation balloon to a hefty $80 million. Not too bad for company that was formed in the last two years. 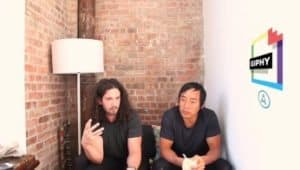 Asked what exactly was the AHA moment was for the genesis of creating Giphy, co-founder Alex Chung, who was named on Business Insider’s Top 25 most influential technologists in New York explains;

“In between startups .. I was just hanging out at Betaworks and Giphy was one of those things that was just kind of fun … it started taking off”

Well that makes it sound easy. They are now serving over 3 billion GIFs a month.

The reality is that both founders, each having extensive experience in media and tech, have been engaged in the startup scene for some time and this isn’t there first go at it.

The offer is generally soliciting under rule 506(c) as defined in Title II of the JOBS Act.

Update: As expected Giphy quickly funded and is now closed to investors.