During a recent interview with Kickstarter, Glover revealed why she decided to return to the crowdfunding giant with her latest project: 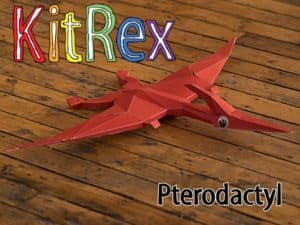 “One of my professors would say that for any question we had about our business, he had the answer: ‘Ask your customer.’ After carefully considering my previous backers’ ideas, I decided to go with the second-most popular choice, saving the most popular one for my next project.

“I spent months tweaking the KitRex Velociraptor, but that didn’t mean it was perfect, or, at least, perfect for my customers. So I asked them what they were frustrated by. Many of them found the glue dots to be a sticking point — or rather, the opposite. Glue dots didn’t work 100% of the time, and that was a problem. After all, I want my kits to be a challenge, but not the kind that turns you into an angry dinosaur. That, plus the order and way in which the pieces are built wasn’t intuitive. 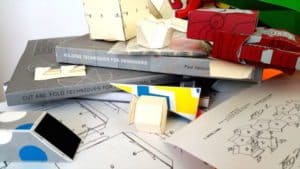 “Keeping these two facts in mind, I hit the books and the digital toy shelves: how did other people solve these problems? I bought quite a few competitor products to learn from, some used adhesives, some didn’t. I also turned to books on paper folding techniques (for anyone especially interested, Paul Jackson is brilliant on this subject), and one place you might not expect: the USPTO (US Patent and Trademark Office). Nearly 100 years ago, people were working to solve some of the same problems I was! I was able to learn from their discoveries, while also taking care to ensure that my designs and methods didn’t infringe on the intellectual property of my more recent paper-folding counterparts.”

“I typically start with an open source mesh model as the base for my paper creations and import it into Rhino. Reducing the dense mesh to a small number of polygons takes time, and this is where the eye of a designer is needed. I need to keep in mind sheet sizes, where pieces will be broken up, what is aesthetically pleasing, what will allow it to have the most structural integrity and, of course, how do I do all of this while staying true to form? This takes a long time but the result is well worth it. Once the design is close to ideal, I “unfold” the polygonal pieces that make up the structure, and the real challenge begins.

“All of my research and design doesn’t mean much if I can’t use what I’ve learned on my creations. So, I went back to my notes and began to apply my knowledge to a complicated piece: the Pterodactyl’s head. Along the way I discovered “rules” about how best to lay out various body parts, where there should be overlap for structural support, and where friction can help hold pieces together without the need for tabs. After a lot of testing, I standardized my tab shapes and sizes. Once I was satisfied with the methodology for constructing the head (and after giving it to a few friends to try out) I applied my new system to the rest of the Pterodactyl.”

In regards to her designs and the project’s future, Glover added: 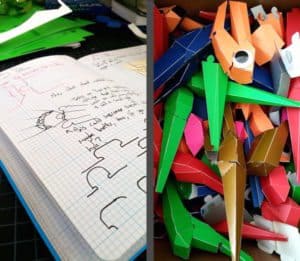 “Once the design has tabs where needed, it’s time to make full-size physical prototypes. For this, I use the laser cutter at my local Makerspace, since it’s fast and very precise. Though things might look good digitally, I often have to make many changes from one prototype to the next —having forgotten a tab here, not providing enough support there… after all, these are complicated creatures!

“When I’m nearly satisfied with my designs, I take them to the firing squad: kids. In early versions of the kit, kids sometimes felt bad for not being able to put something together, and I explained to them, “no, I’m sorry it’s difficult. If it is, that’s my fault”. Knowledge and experience can be a curse when making things for other people to assemble.

“When kids consistently have trouble with a piece, I know I need to change it. It’s crucial to make these changes before they’re set in steel! Once the kids (and adults) can build the kits consistently and have them stay together well, I know the design is as close perfect as possible.

“At this point, I can go on to manufacturing — laser cutting a kit takes 15 minutes, but die-cutting takes only a second. The whole process, since I’m still learning and perfecting it, takes a couple of months. But it’s well worth it. I get to bring fun, colorful prehistoric creatures to life, and then kids of all ages get to build them.”