Hochanda, the self-dubbed home of arts and crafts, has recently launched an equity crowdfunding campaign on Crowdcube to raise nearly 2 million to expand its new television services. 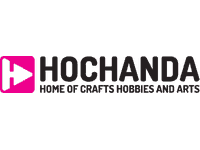 The company, which its name is an acronym for “Home of Crafts Hobbies and Arts,” is described as a new, live broadcast, content-rich, traditional broadcast TV home shopping channel. It debuted on last week to over 25 million UK Homes through Freeview, Sky, Freesat and its own IPTV portal.

“We plan to also penetrate near European markets with language-adapted content. The founders, who know the craft, hobby and art market intimately, have successfully launched and operated TV shopping channels in the past and are investing over £2m of their own money in the Company, alongside £500,000 from the owners of a key trade supplier. HOCHANDA aims to be the craft hobby and art retailer of choice through a combination of innovative, quality products offered at competitive prices with exceptional customer service and product presentation that is both engaging, informative and highly entertaining.”

Also sharing details about its targeted market, the company explained: 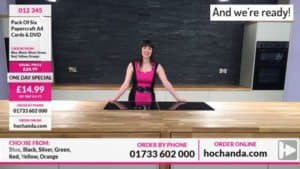 “The craft market in the UK alone, is believed to be worth £3.4 bn a year and is growing rapidly. Today, both in Britain and mainland Europe, we have an ageing population with disposable income and time available looking for new activities that are engaging, stimulating and satisfying. In our opinion, this is encouraging interest in crafts, hobbies and arts – driving the market to grow. This growth is assisted by the emergence of the combination of “How to” TV and internet streamed content which can educate, motivate and encourage people to try new and fulfilling skills by participating in a craft, hobby or art activity. From our research, turning crafts and hobbies interests into income streams is also increasingly popular by many crafters, hobbyists and artists who are increasingly setting up cottage industries to sell what they have created.

“We believe crafters, hobbyists and artists have traditionally sourced their raw materials from specialist retail stores (such as “Hobbycraft” with 81 stores and a turnover of £130 million in 2014) and a myriad of independent shops and departments within some home stores, for example John Lewis. In our experience, stores are limited on the range they can stock and have a limited ability to actively promote items using demonstration sessions which are proven to drive demand. We believe that the real growth in the sector is being driven not by traditional retailers (although they are benefitting) but as a direct result of the new outlets of reality TV (such as‘Sewing Bee’ and‘The Big Painting Challenge,’ ‘Masterchef’’ and ‘The Great British Bakeoff’’ etc.) and significantly by TV shopping channels (such as “Create & Craft’) and the internet (such as ‘Craftsy.com’ ). Sales channels have also developed to allow crafters to sell their wares with etsy.com claiming 1.35 million active sellers and gross sales of $1.9bn in 2014 before its $1.78bn IPO. 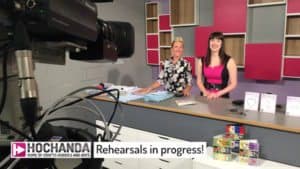 “In recent years, crafters have been able to access‘Create & Craft’ (owned by Ideal Shopping Direct) the dedicated TV shopping channel that launched in 2003, founded by Paul Wright and Val Kaye (now the founder investors in Hochanda). C&C focuses primarily on one small market sector – card making. We believe that Create & Craft makes up a significant proportion Ideal’s expected profits of £21m.”

Since its launch, the Hochando campaign has successfully secured over £1.7 million. The company is also offering 16.21% in equity and its funding initiative is set to close at the end of September.