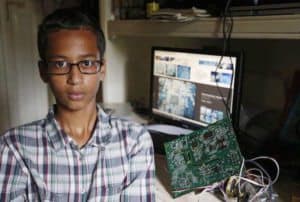 The teenager, who dreams about becoming an engineer someday, brought the digital clock to school to show his teacher. He stated to CNN:

“I built a clock to impress my teacher but when I showed it to her, she thought it was a threat to her. It was really sad that she took the wrong impression of it.”

“[The police] arrested me and they told me that I committed the crime of a hoax bomb, a fake bomb.”

Cool clock, Ahmed. Want to bring it to the White House? We should inspire more kids like you to like science. It’s what makes America great.

“Having the skill and ambition to build something cool should lead to applause, not arrest. The future belongs to people like Ahmed. Ahmed, if you ever want to come by Facebook, I’d love to meet you. Keep building.” 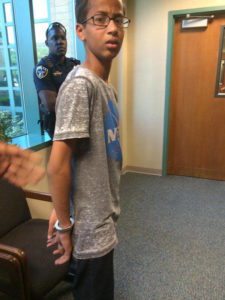 Other supporters of the teen launched a crowdfunding campaign #IStandWithAhmed to raise $100,000. The description reads:

“This campaign is a collaboration of activists & compassionate citizens from Texas and across America, and LaunchGood has personally vetted each contributor and will ensure all funds raised will reach their intended destination”

The campaign’s organizers also noted that the funds will be used to help Ahmed further his education and to help other curious students like him interested in STEM fields have access to MakerSpaces where they can use high tech equipment like 3D Printers, CNC Machines, and all sorts of other cool stuff. They noted:

“We cannot undo the the fear and frustration Ahmed felt when being interrogated by police and walking out in handcuffs.  This moment will forever impact his life. But let’s show him that he is not alone and we support his love for engineering and inventing. At a time when our nation lags behind the world in math and sciences, these funds will help him continue his education and reach his potential. 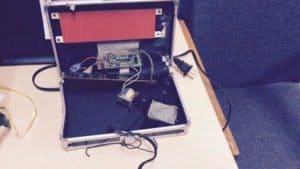 “Young curious minds are not a threat. As a nation, let’s support our youth in increasing their competitiveness in science and technology development because this is what will make out country strong.”

Since the arrest, authorities have shared that Mohamed wouldn’t be charged, but he was suspended. He has since transferred to another school. Some who stand behind the teenager believe that this accusation was due to his Muslim background, but Irving’s police chief, Larry Boyd, stated that Mohamed’s religious beliefs did not have anything to do with the arrest, and he praised the department’s relationship with  Muslim community.