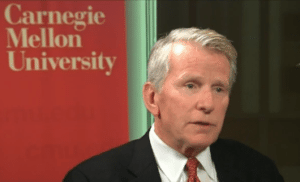 Ray Lane, a Partner Emeritus at Kleiner Perkins, was interviewed by CNBC’s Kelly Evans last week during an excursion to Carnegie Mellon in Pittsburgh.  Lane, a graduate of Carnegie Mellon, is now Trustee at the university.  The discussion was largely about Carnegie’s engineering expertise including a discussion of Uber and autonomous driving cars.

As the final rules on Title III retail crowdfunding had just been announced, a question was directed towards Lane and his thoughts on the new rules. Lane said he did not view capital formation for small companies as an issue. Perhaps his opinion has to do with being in the money bucket of the country out in Silicon Valley.  He said he was not certain as to why companies need to go out to “crowdsourcing” to get that fulfilled. Lane pointed out that when you get venture capital, you get help that goes along with it.  “The CEO can’t just do it alone with mail in checks,” said Lane.