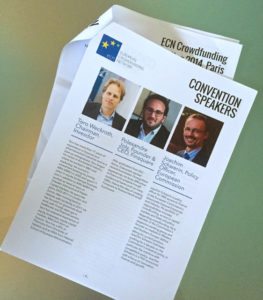 The European Crowdfunding Network has made it easier for young investment crowdfunding platforms to join the pan-European advocacy group. In recognition of the fact that startups typically try to keep costs as low as possible, ECN is now allowing aspiring members to join at less than half the cost of a full member. By joining you will, of course, get access to their network of fintech thought leaders who are active across Europe. But once you join, you must adhere to their Code of Conduct. You may read the Code here but it is heavy on transparency and integrity – which is what you would expect.

The ECN was founded in 2011 and quickly became a voice for advocacy on new forms of finance. The ECN strives to maintain communication with the EU and other public institutions – a vital role for internet finance, including crowdfunding, to develop correctly.  The ECN organizes CrowdTuesday events in different cities around Europe and for the past several years has held its annual meeting in Paris.