On Wednesday, global crowdfunding platform Indiegogo announced it has teamed up with pharmaceutical giant, Pfizer, to launch a new initiative called, Project Get Old.

Sharing details about the campaign, Indiegogo revealed in a blog post: 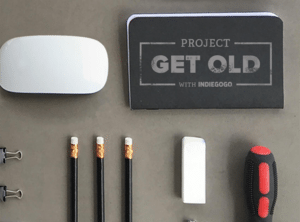 “Age doesn’t have to dictate our health. If we take care of ourselves, our later years can offer a level of self-determination and freedom of opportunity unmatched by any other time in our life. This is especially true today, with many entrepreneurs finding new ways of monitoring, motivating, and improving our lives as we age. That’s why Indiegogo and Pfizer are teaming up to launch Project Get Old – highlighting innovations that can help make life better as we get older. Over the summer, we’ll share projects that aim to change the future of aging, with the chance for one creator to win extra funding and mentor support from the Pfizer team.”

The funding portal went on to state that the “best of the best” will be featured on Pfizer’s Get Old Facebook page for the next couple of months and the Get Old community will be able to vote for their favorites. One project will receive a total of $50,000 and a trip to Pfizer’s headquarters in New York where they can brainstorm and workshop their ideas with the company’s team.

Indiegogo will be opening the initiative’s submission on Thursday with the cutoff being June 28th. Voting 1 will begin on July 13th and the first round winners will be announced on July 21st. The second round of voting will be on July 27th and the winner will be selected on August 4th.

The voting on Rounds 1 and 2 finalists will start on August 10th.