Just two years after securing more than $3.3 million on Kickstarter for its carry-on luggage set, LA-based startup G-RO announced it is returning to the reward-based crowdfunding giant’s platform for its new companion bag line. While sharing details about the crowdfunding return, the G-RO team stated: 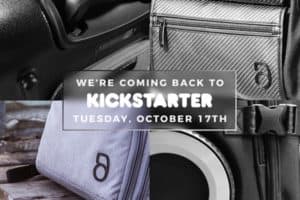 “It’s hard to believe it’s been two years since we launched G-RO on Kickstarter. Because of the awesome community and backers like you, we are to this day the most successful crowdfunded luggage campaign ever. Since then, we’ve been hard at work doing what we do best – innovating and reimagining not only how you travel, but also *SPOILER ALERT* work and play! To show our gratitude for your tremendous support, we wanted you to be the first to know that we’re coming back to where it all started with exciting new bags.”

As previously reported, G-RO is described as a unique luggage system that is on a mission to evolved from the shifts and changes in travelers’ needs and daily routines. It provides a solution for the busy business traveler’s needs, whether they’re traveling around the block or around the world. Travel-Light noted that the G-RO is based on innovative engineering and design concepts, including large, axle-less wheels and has successfully overcome the challenges posed by the cardinal issues of durability, affordability, interior and exterior volume, and weight, delivering a superior luggage system for today’s on-the-go crowd.

The new campaign is scheduled to go live on Kickstarter next Tuesday (October 17th).