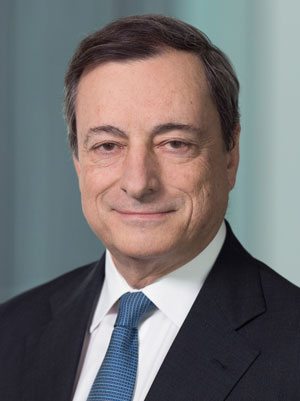 Speaking in Brussels last week, Mario Draghi, President of the European Central Bank (ECB), addressed the topic of digital currencies. Siegfried Mureşan (PPE), speaking on behalf of Tom Vandenkendelaere who was unable to attend the meeting, posed this question to Draghi regarding the emergence of cryptocurrencies;

Draghi responded by saying the impact of cryptocurrencies within the Eurozone and the use in the real economy is still rather limited;

“It is not yet something that could constitute a risk for central banks,” said Draghi. “More generally, however, the digital technologies, the DLT [Blockchain] and other technologies that could be used, are certainly a development which should be receiving the interest of central banks and supervisors. The ECB and various national central banks are already working on this and have been working now for several months. We coordinate our work across the euro zone, the ESCB. Other streams of work are taking place in the BIS and one key angle, which has, in a sense, become the most important aspect of this discussion, is cyber risks.”

Draghi cautioned on the growing risk of cyber attacks – an issue that imperils both traditional finance and innovative finance alike.

“… first of all, a harmonised reporting of cyber incidents across the euro zone, and second, a sharing of best practices by all the national central bank supervisors and ECB sup ervisors, because it is quite clear that actions on this front do require a collective effort. Similarly, collective efforts are taking place at global level, in the G7, in the G20, and in the BIS. I hope all this is enough. It is an area in continuous expansion.”

Cyber security is exceptionally important as the many recent attacks have proven.  Cryptocurrencies, while obviously not immune to cyber attacks, represents a smaller risk in aggregate as the total asset base is quite smaller. Obviously, the rapid growth of crypto utilization will see an increase in risk alongside traditional finance.