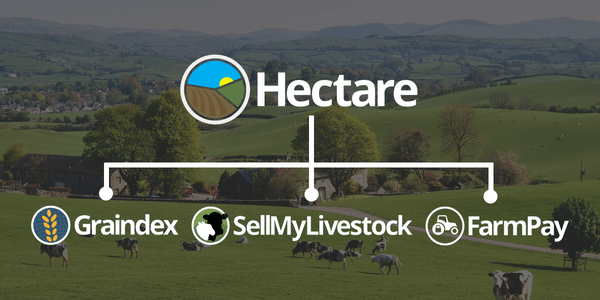 Hectare Agritech, a UK-based online marketplace for the agriculture sector, launched its third investment round on equity crowdfunding platform Seedrs. The company is currently seeking £500,000. The launch of the campaign comes just after Hectare released FarmPay, a dedicated payment platform.

Founded in 2016, Hectare described itself as an agritech company that’s entirely focused on exploiting current inefficiencies, and deficiencies, in the family industry supply chains. The company revealed:

“Hectare is a UK leading agricultural marketplace provider – disrupting out of date trading processes that haven’t changed in hundreds of years and revolutionising the way farmers do business through two online platforms, SellMyLivestock and Graindex and a dedicated funds transfer system, Farmpay.”

While sharing details about the company’s growth and crowdfunding efforts, Jamie McInnes, CEO and Co-Founder of Hectare, stated:

“We’re confident we’ve reached critical mass now with an annualised listing value of over £40 million and the value of the average listing on the site having doubled to over £8,000 since launch. Crowd-funding is always a little bit scary because it’s so immediate, but we’ve almost hit half our target in the first twenty four hours and we just can’t stop refreshing the screens in the office. The investment this time round will help us scale up much faster than we’ve been able to so far and add yet more services to the platform. There’s a lot more to come yet.”

All funds from the latest equity crowdfunding campaign will be used to continue Hectare’s expansion. Since its launch, the funding round has raised nearly £290,000 from more than 100 investors. It is set to close later this winter.