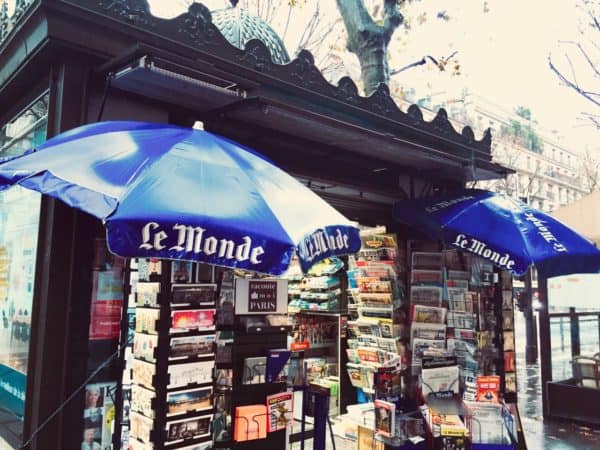 The annual Alternative Finance & Crowdfunding Barometer compiled by KPMG for the French Crowdfunding Association (Financement Participatif France, FPF) shows that in 2017 the French Alternative Finance market grew by 50%, driven by SME lending growth, and came close to the billion euro mark, at €940 million. Crowdfunding, as a subcategory of alternative finance open to retail investors, grew slightly slower at 44%, and equity crowdfunding shrank. The industry hopes that the French government’s policy will help sustain, or even reaccelerate its growth.

The barometer is Alternative Finance & Crowdfunding Barometer is based on surveying 76 platforms. Mikaël Ptacheck and Fabrice Odent of KPMG presented the results together with Stéphanie Savel, President of FPF and CEO of equity crowdfunding platform WiSeed, and Romain Payet of Lendopolis. 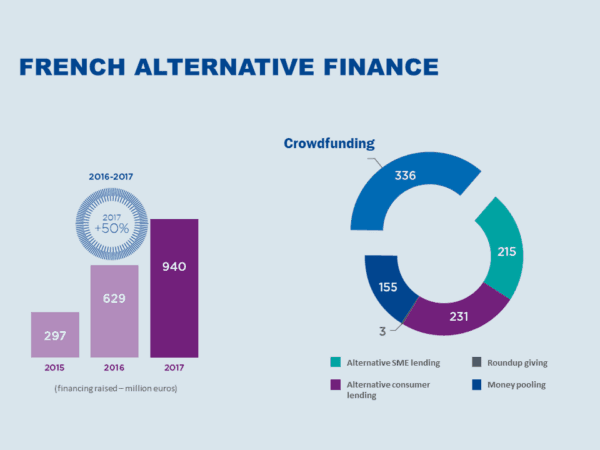 As before, the Barometer separates alternative lending funded by institutional investors, family offices and selected qualified investors from crowdfunding and crowdlending open to retail investors. In both categories, SME financing is the clear driver of alternative finance growth.

The market is heavily concentrated, with the top 5 platforms, Lendix, Credit.fr, Lendosphère, Unilend and Lendopolis accounting for more than 80% of the loans originated. Credit.fr, which was recently acquired by investment firm Tikehau Capital is growing fastest. Funded for more than 80% by non-retail money, Lendix captures more than half of the market. Most recently, the platform raised €120 million of a new €200 million investment fund designed to finance SME loans from 2018 on.

Note that the SME lending numbers now include all forms of SME debt financing, including factoring (Finexkap), bonds (WeSharebonds, Clubfunding), and all categories of businesses including startups, real estate and renewable energy projects.

Real estate is a sizeable 25% of all business lending. According to Laurent Altmeyer of Hellocrowdfunding, real estate marketplace lending grew by 63% in 2017 to reach €101 million. The market is also heavily concentrate on leaders WiSeed and Anaxago, followed by Lendix, Clubfunding, Fundimmo and Homunity.

Other up and coming sectors are renewable energy (Lendosphere, Lumo), social impact, and agriculture.

Alternative consumer lending grew only by 17%, from €197 million to €231 million, three times more slowly than in the previous year. The market is dominated by Younited Credit which originated €227 million worth of consumer loans in France, Italy and Spain in 2017. Younited’s growth remained high in terms of number of loans (nearly +50%) but the growth in euros was slower because the company introduced smaller €1,000 to €3,000 loans and stopped promotional campaigns that were waving fees on large loans.

“Younited’s 2016 objective was to win market share. We succeeded and became the top Continental European consumer lending platform, ahead of Germany’s Auxmoney which had launched four years before. Once we reached this milestone, we decided to prioritize the growth of our Net Banking Income over the growth of loan volumes,” commented Geoffroy Guigou, co-founder and COO, Younited Credit

In September 2017, Younited raised €40 million ($48 million) from its historical investors. 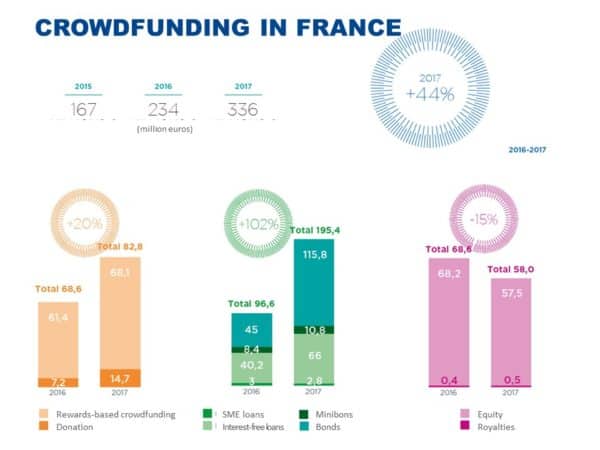 Donation and rewards-based crowdfunding platforms remain the unsung heroes of French alternative finance as they manage to raise €83 million, €60 to €70 at a time. The sector is dominated by the two Paris-based European platforms Ulule and KissKissBankBank, which have collected, respectively, nearly €100 million and €80 million since inception. Originally focused on sponsoring music and other artistic projects, rewards-based crowdfunding is increasingly being used in its pre-sale format to help launch micro businesses and small businesses.

Donation crowdfunding doubled in size. One of the most notably successful donation platforms was Dartagnans, a platform exclusively dedicated to the preservation of French cultural and artistic heritage. Dartagnans raised €1,6 million through an equity crowdfunding campaign to finance the restauration of a castle in Mothe-Chandeniers (pictured above, following this link for a wonderful video showing both the beauty and the dreadful state of decay of the castle).

French equity crowdfunding raised a mere €58 million, 15% less than in the past year. The sector remains fragmented. Leaders WiSeed and Anaxago are making most of their revenue from real estate crowdfunding. This enables them to offer new, more liquid opportunities to their community of investors while these await their first exits.

The French government recently radically changed the rules of capital gain taxation for French households. As of January 1st, the French wealth tax is abolished, and the progressive marginal tax rate applied to capital gains is replaced by a flat tax of 30%. For wealthy and high-earning households, this represents a tax cut of more than half.

This tax reform brings France more in line with the income taxation levels of the rest of Europe. However, not is all good news as some strong tax incentives disappear along with the taxes they were based on. In particular, most of the tax reliefs granted for holding assets such as stocks for the longer term are discontinued.

The French crowdfunding association places much hope is the coming government programs to support SME growth and to help “redirect French savings towards the productive economy.”

So far, the government has reluctantly granted a 1-year, 25% tax deduction for SME investments (capped at €10,000 or less). There will be no tax incentive coming even remotely close the UK’s Seed Enterprise Investment Scheme (SEIS) that is a major driver for equity crowdfunding in the UK.