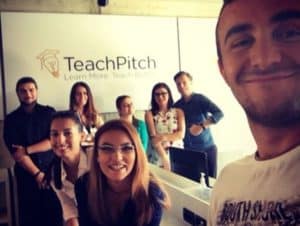 Founded in 2014, TeachPitch described itself as a technology that maps and matches teachers’ learning needs with the best material available. TeachPitch was created to tackle the problem of information overload for teachers and schools. It helps schools to organize, manage, and discover the best of online learning. The company also noted that its software is used in hundreds of schools and has started to certify its users to provide online tutoring to other educators on the platform. TeachPitch also reported:

“TeachPitch was acknowledged as 1 of the 20 fastest growing eLearning companies in the United Kingdom in 2015 by EdTech Europe, as 1 of the 50 best tech companies in the United Kingdom by the Great British Entrepreneur Awards in 2016 and received an Award for Educational Excellence, Teaching and Leadership by the World Education Forum in Mumbai in 2017.”

TeachPitch also noted it has signed commercial deals with notable educational institutions in the UK, U.S., and China. Also partnered with Education company OneWorld for software to be used in over 500 schools. TeachPitch has received an offer for a $150,000 grant by an international non-profit organization for the rollout of technology in public schools in Eastern Europe.

All funds from the latest Crowdcube round will be used to accelerate TeachPitch’s expansion in China, grow its tutoring program and develop a mature machine learning and AI technology. The campaign is currently set to close at the end of March.