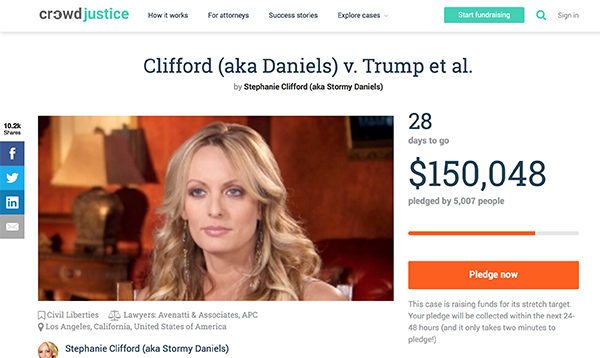 Following the announcement that she is suing President Trump over a non-disclosure agreement about their alleged affair in 2006, Stephanie Clifford, also known as Stormy Daniels, has launched a crowdfunding campaign on CrowdJustice, seeking funds to cover her legal fees and other expenses. While sharing details about the legal situation, Daniels revealed on the crowdfunding page:

“I am attempting to speak honestly and openly to the American people about my relationship with now President Donald Trump, as well as the intimidation and tactics that he, together with his attorney Michael Cohen, have used to silence me. In order to tell my story, I have had to file a public lawsuit in Los Angeles, California in an effort to void a non-disclosure agreement (NDA) that Mr. Trump never signed and yet is trying to use to intimidate me. Rather than agree that the NDA is invalid, thus allowing me to talk, Mr. Trump and Mr. Cohen have instead attempted to hide the facts from the public using a bogus arbitration proceeding and have threatened me with millions of dollars in damages ($1M each time I speak out) if I tell the truth about what happened.”

Daniels also explained that she recently made an offer to return the $130,000 she was previously paid if it was agreed that she could tell her story publicly, but the President and Cohen notably did not even bother to respond. She reported that she needs funds to pay for attorneys’ fees; out-of-pocket costs associated with the lawsuit, arbitration, and my right to speak openly, security expenses, and damages that may be awarded against her if she speaks out and ultimately lose to the President and Cohen. She then added:

“This money is not going to me personally. Ever. It is only being used to cover the legal expenses and potential damages I describe on the home page. If the money is not needed, it will be used pursuant to the CrowdJustice guidelines on unused funds as with all other cases on their site. In other words, I am not going to pocket any money. The money is being controlled at all times by my attorneys in a trust account.”