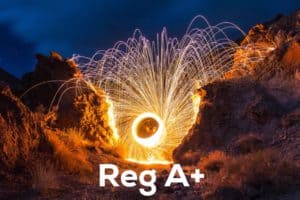 Most securities initial coin offerings (ICOs) are being filed under Reg D 506c in the US. This enables an issuer to sell securities to accredited investors. Reg A+, an updated securities exemption, enables issuers to offer securities to both accredited and non-accredited investors. Reg A+ is frequently touted as the best path for ICOs as companies may raise up to $50 million and the securities issued may become immediately tradable (unlike Reg D where there is a one year lock up). Multiple ICOs have filed for a Reg A+ offering but few, if any, have been qualified by the Securities and Exchange Commission (SEC). Prometheum, a blockchain based company, is saying they have “cracked the code” as to how to get a compliant Reg A+ ICO done.

“Issuing legal tokens via a Reg A+ filing is the first step in the process of creating a legal ICO trading platform,” stated Aaron Kaplan, Co-founder and COO of Prometheum in a public release. “We have cracked the code on how to do this within the confines of Federal Securities Laws. Prometheum anticipates hosting its first ICOs for issuers in early 2019 once its tokens are approved for market issuance.”

Prometheum says it has been working more than a year to construct a compliant ecosystem for ICOs.  Prometheum wants to create a trading ecosystem for ICOs of securitized tokens to any type of investor. The company is proposing a “warrants / Ember tokens and smart contract-enabled blockchain” to provide “a soup-to-nuts securities ecosystem, from issuance to trading through clearing and settling.” Prometheum says it expects to host its first ICOs for issuers in early 2019. For now, it is focusing on its own ICO which will be paired with a concurrent Reg D 506c offer.

According to the Reg A+ filing with the SEC, Prometheum is hoping to raise up to the $50 million max. The filing states:

The Reg A+ securities offer is expected to become public in Q3 of 2018.