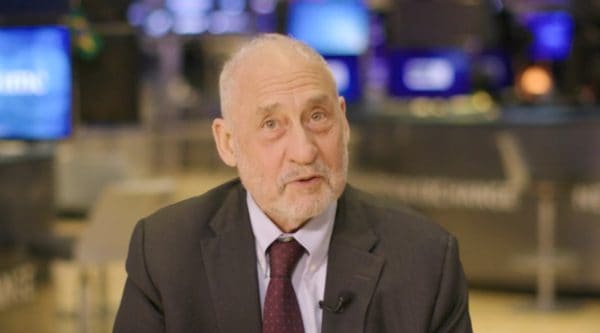 Columbia University Economics Professor Joseph Stiglitz, a long time financial transparency advocate who won the Nobel Prize for Economics in 2001 says cryptocurrencies function poorly as currencies, push economic activity underground and, for these reasons, should be “shut down.”

Stiglitz made the comments in an interview at CNBC.

Stiglitz began by laying out an argument for how comprehensive data from an electronic money network would aid in regulating the economy:

“I’ve been a great advocate of moving to an electronic payments mechanism. There are lots of efficiencies. I think we can actually have a better-regulated economy. If we had all the data in real time knowing what people are spending, it would enable the Federal Reserve to actually set interest rates in a much more efficient way. We would have…better macroeconomic management.”

Cryptocurrency adoption, says Stiglitz, moves the economy in the opposite direction:

“It also would curb some of the illicit economic activities and it disturbed me a great deal the attention that was given to cryptocurrencies cuz those were moving things off of a transparent platform onto a dark platform.”

Stiglitz defended the American dollar and the Federal Reserve, both of which are often attacked by cryptocurrency advocates for alleged mismanagement:

“We have a very good currency. So far, the currency has been run in a very stable. There is no need for anybody to go to a cryptocurrency.”

He also said cryptocurrencies do not function well as currencies. Others have made similar claims based on the argument that cryptocurrency networks’ hard-wired supply protocols mean issuance can not be adjusted in order to respond to real-world circumstances:

Rather than moving underground, Stiglitz advised that concerned parties work to address how to prevent transparent money from becoming surveillance money:

“I actually think we should shut down the cryptocurrencies.”

Cryptocurrency advocates were quick to ridicule Stiglitz and other economists and bankers who have called out the sector:

According to Encyclopedia Britannica, Joseph Stiglitz won the Nobel Prize for Economics in 2001 for his work, “…laying the foundations for the theory of markets with asymmetric information.”

Stiglitz’s work has been applied to improve accuracy in insurance markets:

“Stiglitz’s research concentrated on what could be done by ill-informed individuals and operators to improve their position in a market with asymmetric information. He found that they could extract information indirectly through screening and self-selection. This point was illustrated through his study of the insurance market, in which (uninformed) insurance companies lacked information on the individual risk situation of their (informed) customers. The analysis showed that by offering incentives to policyholders to disclose information, insurance companies were able to divide them into different risk classes.The use of a screening process enabled companies to issue a choice of policy contracts in which lower premiums could be exchanged for higher deductibles.”

Why Joseph Stiglitz wants to shut down cryptocurrencies from CNBC.