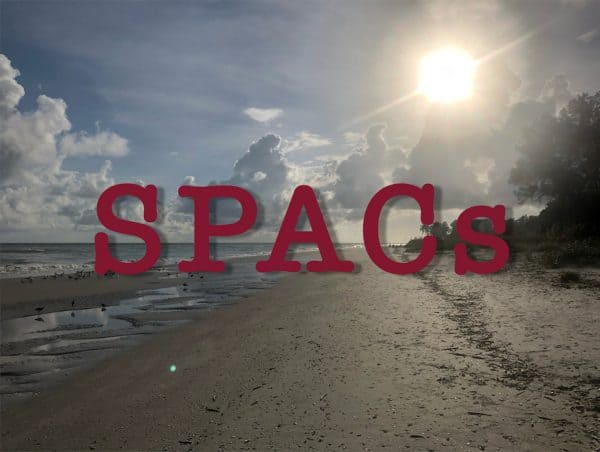 Schwartz noted that the growth of SPACs gives private business owners an “efficient, rapid” path to accessing capital. He states:

“It’s one of the biggest challenges entrepreneurs and founders face today — how do I access the capital I need to steady my business, transform as needed and scale up for what’s next?That long road is especially bumpy given current market conditions (due to the COVID-19 pandemic), where capital is constrained. That’s why some owners of privately held businesses are using a rapidly growing pathway to capital by merging with special purpose acquisition companies, or SPACs.”

Fintech advisor Efi Pylarinou recently confirmed that around 50% of US initial public offerings (IPOs) are actually SPACs. She pointed out that Reuters reported that firms have secured over $70 billion in U.S. IPOs so far this year. Meanwhile, Barron`s revealed that, in 2019, one in four or 25% of IPOs in the US were carried out through a SPAC. They reportedly managed to secure around $13.6 billion in funding for 59 SPACs.

Schwartz explained that SPACs are established to raise funds with “the sole purpose of acquiring one or more unspecified private companies after going public, usually within 18 to 24 months.” He clarified that SPACs aren’t actually operational.  They essentially act as a sort of “temporary cash box” that’s used to “identify a merger target and facilitate its access to public markets.”

Pylarinou notes that, as of mid-August 2020, there had been 86 different SPAC offerings that were finalized in the US through which more than $34 billion in capital was raised.

Schwartz argues that SPACs have been “a legitimate vehicle to take private companies public for years.” However, they’ve only grown in popularity during the past 10 years. He reveals that, in 2010, there were only two SPACs that carried out an IPO. This year, an estimated 76 will complete their SPAC IPO (although estimates may vary).

Schwartz claims that, as of July 2020, there were 100 SPACs, “with $30 billion in equity held in trust seeking acquisitions.” He added that, by the end of this year, around 65 mergers between SPACs and privately held firms are expected to be finalized (in the past couple years).

He further explained that SPACs are established by sponsors with “specialized financial capabilities — usually institutional investors or private equity firms.” The sponsor takes care of the groundwork needed to conduct the SPAC’s IPO. In certain situations or cases, the sponsor also manages to acquire additional capital, like a private investment in public equity (PIPE) commitments or debt financingk, Schwartz noted.

He clarifies that the SPAC “can’t identify potential targets for acquisition prior to its IPO, but it can specify an industry or geographic area of interest.”

“Once the SPAC completes its IPO, it can begin reaching out to potential merger candidates. SPACs typically target companies that are two to three times their size to mitigate the dilutive impact of the equity structure. When an agreement is reached and is approved by shareholders, the transaction closes and the SPAC is considered closed. The target company survives as the publicly listed entity.”

He also mentioned that SPACs offer an improved or more efficient way to carry out a public market listing, which can be finalized in months instead of taking years (via the traditional route) to complete a merger.

Schwartz claims that the SPAC process is “far less disruptive and labor-intensive” than carrying out a traditional IPO. With SPACs, firms are also able to gain a considerable amount of capital — “including the proceeds from the SPAC’s IPO and other secured funding — to support operational growth, expand supply chains, seek acquisitions and more,” Schwartz explained.

With SPACs, the target firm is able to gain access to other types of flexible funding options, including mezzanine debt, senior debt, and convertible preferred shares, Schwartz noted.

He added that SPACs may serve as a useful tool or mechanism for private firms which may include pre-revenue and operational companies, as it can allow them to carry out a public listing and gain access to capital in a fairly quick and efficient manner.