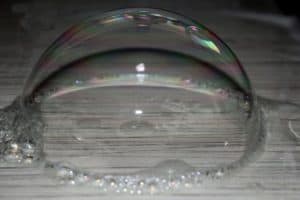 China’s regulatory authorities have reportedly been telling local banking institutions to “trim” their loan books during 2021 to guard against potential risks resulting from bubbles in domestic capital markets. This, according to an update from Reuters which cited sources familiar with the matter (on March 5, 2021).

The banks, which includes foreign and State-managed lenders, have received guidance from the reserve bank during the last few days instructing them to restrict or curb the size of their lending in 2021, according to bankers who commented on the condition of anonymity.

The China Banking and Insurance Regulatory Commission (CBIRC) is also “seriously” conducting investigations into the misuse of business loans made to individual borrowers for making personal investments, which is a violation of applicable Chinese regulatory guidelines.

One of the source revealed:

“A large amount of money in the name of business loans had flown into the property and stock markets during the pandemic last year. Banks are scrambling to collect back loans issued last year and will not extend such loans.”

The CBIRC and the People’s Bank of China, which is China’s reserve bank, has not yet provided detailed comments on these matters.

China significantly increased its credit support to the economy last year as the Coronavirus crisis hit, however, some people actually spent a considerable amount of funds purchasing properties and stocks – which may have led to the bubbles in financial markets, the sources claimed.

Business loans are needed to be used to cover operational costs like rent payments and buying equipment. China’s banking regulator has specifically told borrowers not to use money from loans to spend on stocks and buying property.

Providing loans to small businesses by large commercial banks surged as much as 50% during 2021 and is expected to increase 30% further in 2021, according to the Chinese government report released on March 5, 2021. China also asked banking institutions to increase lending and reduce interest rates for SMBs last year.

Guo Shuqing, Head of CBIRC, recently noted that he was quite concerned about the risks of bubbles bursting in international markets and warned that bubble risks were a major issue or problem facing the Chinese property or real estate sector.

In another Asian market update from the WSJ, it has been confirmed that just like in the United States, investing apps have managed to attract individual traders who may have a lot more time on their hands due to the COVID-19 pandemic (which has led to many more people staying indoors).

Stock trading has really picked up in most regions across Asia, as capital markets have been gradually recovering from the shock of the Coronavirus outbreak, with many younger investors aggressively buying speculative stocks for the first time ever.

Trading activity on the Shanghai and Shenzhen stock exchange has now managed to reach levels last seen during China’s 2014 and 2015 boom, the WSJ confirmed. Trading on stock exchanges based in Seoul and Hong Kong has also reached record-level highs.

Shares have also been changing hands in record numbers in India, Taiwan, Indonesia and Vietnam.

This dramatic surge in trading activity has benefited stock exchange operators such as the Hong Kong Exchanges and Clearing Ltd. , whose shares reached record highs, and for digital brokers providing services similar to Robinhood in the US.

Futu Holdings Ltd., a digital brokerage supported by Tencent Holdings Ltd. whose shares trade in the United States, surged to a $19.5 billion market cap as of Wednesday (March 3, 2021)— which is almost 12x what it was valued at just a year ago. Meanwhile, Shenzhen-listed East Money Information Co. has managed to increase to twice its previous value to now claim a $42 billion+ valuation.

“We’ve seen armies of Asia retail investors appear and invest in sizes that are mind-boggling, both in terms of trading volumes and the value of shares traded.”