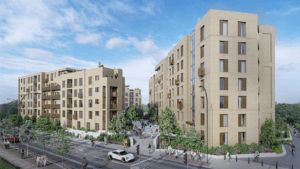 LendInvest, a property finance Fintech, is working with Homes England to finance and build 500 apartments in Ashford, Kent. Kings Crescent Homes is the build and the project is expected to cost £90 million. Construction is expected to start immediately to bring into use a development with the project to be split into two phases.

According to LendInvest, Phase 1 will see the development of 143 units and some commercial amenities, with a GDV of over £35 million.

Phase 2 will include the development of a further 257 flats, at a GDV of over £55 million.  The project is anticipated to reach practical completion in 2023.

The development is said to be 5 minutes walk to Ashford’s International Train Station, which is only 30 minutes to Central London and less than 2 hours to Paris

Rod Lockhart, Chief Executive Officer at LendInvest, said they are pleased to see a development on this site moving forward and to kick off a new partnership with Homes England and Kings Crescent Homes.

Stuart Dawkins, Head of Development Finance at Homes England, added they are delighted to be supporting a burgeoning SME developer delivering their first scheme to the Ashford market.

“We’re extremely excited to develop this well-located and attractively designed scheme, with phase 1 to be named The Triangle, in Central Ashford, alongside our funding partners LendInvest and Homes England. For a very affordable price point, this development will offer premium spec units with views of the neighbouring Victoria Park and River Stour, in one of the UK’s fastest-growing towns which benefits from high-speed rail connections which can get you to Central London in circa 30 minutes.”