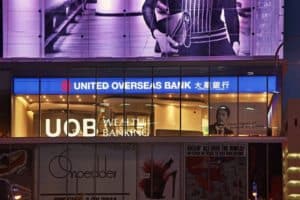 The Marketnode platform leverages DLT to connect with different parties that are involved in the transaction, including the issuers and investors. The Marketnode solution tokenizes the capital security, so that smart contracts may be created and executed for greater overall efficiency.

The digital bond is being run along with the traditional issuance process.

UOB’s AT1 securities have reportedly been priced at a fixed coupon rate of 2.55%, which the bank confirmed is the lowest for a benchmark perpetual securities for Singaporean banks.

The transaction reportedly saw a subscription rate of 1.7x, which was supported by a large investor base consisting of top institutional accounts and private banking investors. Approximately 92% of them are based in Singapore, meanwhile, the other 8% were international investors.

UOB is the sole global coordinator and, along with Credit Suisse, HSBC and Standard Chartered, the joint lead managers and bookrunners.