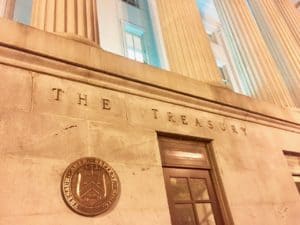 On Tuesday, September 21, 2021, the US Department of the Treasury’s Office of Foreign Assets Control (OFAC) had released an advisory on the sanctions risks associated with carrying out ransomware payments and the “proactive” steps firms may take to address these types of risks. This advisory “expands upon OFAC’s October 2020 advisory,” the Chainalysis team writes in a blog post.

The blockchain security firm noted that OFAC appears to echo many important points from the previous advisory, like the fact that a firm handling ransomware payments “on behalf” of a victim – including crypto exchanges – may “violate OFAC regulations.”

Although OFAC seems to stop short of completely banning all payments, they provide several  updates in this advisory:

Chainalysis data reveals that ransomware attacks have gone up significantly during the last year and a half. Ransomware payments surged over 300% from 2019 to 2020, when they reached more than $400 million worth of crypto. Based on available data, ransomware attackers “show no signs of slowing down in 2021.”

“On Tuesday, September 21, in addition to releasing the updated advisory, OFAC announced that Russia-based cryptocurrency Over The Counter (OTC) broker Suex was designated pursuant to Executive Order 13694 and added to the Specially Designated Nationals and Blocked Persons (SDN) List, thereby prohibiting Americans from doing business with the company. The designation included a number of digital currency addresses as identifiers.”

The blockchain firm added that they’re “proud to share that Chainalysis tools aided in the investigation of Suex.”

They further noted that these designations “mean that if a ransomware victim chooses to pay the ransom, they risk making a payment to a designated malicious cyber actor and engaging in a sanctions violation.”

In its last advisory, OFAC made it clear that ransomware victims and consultants “who facilitate ransomware payments could face penalties associated with sanctions violations.” While victims can apply for license applications to OFAC, they noted that “applications would be reviewed on a case-by-case basis with a presumption of denial.”

“This means that companies that facilitate ransomware payments to sanctioned malicious cyber actors on behalf of US persons or businesses may result in sanctions violations for those US persons or businesses. In addition, US businesses, such as cyber security companies and cryptocurrency exchanges, may not facilitate ransomware payments to entities or individuals subject to US sanctions on behalf of non-US persons.”

New in OFAC’s guidance is the “explicit recommendation” that firms not pay ransom or extortion demands. OFAC “cites concerns that companies that facilitate ransomware payments on behalf of victims ‘not only encourage future ransomware payment demands but also may risk violating OFAC regulations.'”

Furthermore, ransomware payments may “threaten U.S. national security interests by enabling criminals and adversaries with a sanctions nexus to profit and advance their illicit aims.”

OFAC advises that “the U.S. government strongly discourages all private companies and citizens from paying ransom or extortion demands and recommends focusing on strengthening defensive and resilience measures to prevent and protect against ransomware attacks.”

OFAC outlines the factors they “will consider in an enforcement response in the case of a sanctions violation, such as a paying ransom to a sanctioned ransomware actor.”

Chainalysis also mentioned that “one of the mitigating factors outlined in this updated guidance is whether a company has taken meaningful steps to improve their cybersecurity practices, thereby reducing the risk of extortion.”

This new guidance is “an important push for companies to improve their defensive and resilience measures, with the aim of reducing companies’ vulnerabilities to ransomware attacks and decreasing the number of attacks that occur.” This will, in turn, lower the overall risk of potential sanctions violations that “occur when companies face the choice of whether to pay ransomware attackers.”

“While the October 2020 OFAC guidance had noted that a complete report of a ransomware attack to law enforcement would be considered a significant mitigating factor in determining enforcement actions in the case of sanctions violations, this updated guidance goes into much greater depth about what level of cooperation is sought and how OFAC will take this cooperation into consideration.”

For instance, OFAC notes that they “want reports of ransomware attacks to be made as soon as possible after the attack, self-initiated, and complete, and that reports may be made to law enforcement or other relevant U.S. government agencies, including CISA or the U.S. Department of the Treasury’s Office of Cybersecurity and Critical Infrastructure Protection (OCCIP).”

“The clarification that sanctions violations will likely be resolved with non-public responses if companies cooperate with law enforcement is important because many companies have been reluctant to report ransomware attacks to law enforcement for fear of the reputational harm that might come to them if the attack became public.”

OFAC offers an updated list of agencies victims can turn to “in the case of a ransomware attack, payment, or any potential sanctions nexus in order to receive voluntary disclosure credit, and strongly advises all victims and those involved with addressing ransomware attacks to report the incident.”

They note that “the sooner that incidents are reported, the more likely victims are to recover access to their data, and that by reporting attacks, victims provide ‘critical information needed to track cyber actors, hold them accountable, and prevent or disrupt future attacks.'”

By offering more resources and pinpointing the advantages to victims of reporting ransomware attacks, “hopefully more victims will be encouraged to come forward and report incidents, which will allow for a more comprehensive picture of the threat and better equip law enforcement in their investigations,” Chainalysis noted.

If you’re attacked, or working with a client that has been attacked, you should “collect as much evidence as possible, such as screenshots of ransom messages you receive, and send it to the appropriate government agencies so they can learn what strain of ransomware you’ve been hit with and start formulating a response,” Chainalysis recommends. That’s because effort is “measured in relation to possible violations, you should work directly with law enforcement, OFAC, and FinCEN.”

Chainalysis KYT customers should “set alerts to be notified if their users receive or send ransomware payments and report them to their regulators and law enforcement when applicable.”.