It is becoming clear that Hurricane Sandy has had an astonishing impact on the eastern seaboard of the US.  Dozens are dead.  New York officials estimate that up to 40,000 people were left homeless by the storm.  The FEMA trailers made famous in the wake of Hurricane Katrina could be on their way back in New York, New Jersey and Connecticut.  An untold number of restaurants, stores and other businesses were also affected.

In the face of all this disaster, crowdfunding portals are making an effort to rush aid to those in need and they’re helping in a very direct way.  Two participating web sites are Fundly and HelpersUnite.

One Fundly offering in particular speaks to the profound way crowdfunding could change disaster relief for the better.  Sean and Shana Carroll did not have flood insurance and lost their home in the storm, which created a very desperate situation for them and their two young boys.  Today they have successfully raised $15,000 from individuals using Fundly’s platform.  That total could increase drastically with 56 days left in the campaign.  The only cost to the family will be Fundly’s typical charge of 4.9% of total donations.  The Carroll’s now have a great chance at regaining some semblance of normalcy in the coming weeks and months.

HelpersUnite, another charity-focused crowdfunding portal, has waived their typical offering fee for Hurricane Sandy victims.  Victims can now crowdfund their own Sandy relief and only be responsible for credit card processing fees.  These fees are deducted from the funding total only when a campaign is successful.

Christina Hermida of HelpersUnite has high hopes for the impact of crowdfunding on disaster relief.  “After the chaos subsides, emergency efforts and the mobilization of all the donations passes, those who lost their homes and need to rebuild their life find themselves at a loss,” she said.  “Whether they have insurance or get help from family/friends, natural disasters are unexpected and nobody is fully prepared to lose it all. This is where crowdfunding comes in.”

HelpersUnite has also launched a parallel web site, www.SandyStatus.org, that acts as a crowdsourced information repository.  The site draws from sources like Instagram, Twitter and RSS Feeds and aggregates all of this data in one place.

“Whether they have insurance or get help from family/friends, natural disasters are unexpected and nobody is fully prepared to lose it all. This is where crowdfunding comes in.”

Yet crowdfunding campaign is aiming to gather funds to transfer directly to the Red Cross.  Restore the Shore has leveraged the Selfstarter.us paltform developed and open-sourced by the makers of Lockitron.  To date they have raised just short of $100,000, which isn’t bad for a campaign that declared a $25,000 goal.  Donations undoubtedly will climb higher with 24 days left in the campaign.  Donators are rewarded with apparel commemorating the effort and the now-infamous #HurricaneSandy hash tag, as well as a mention on the campaign’s web site. 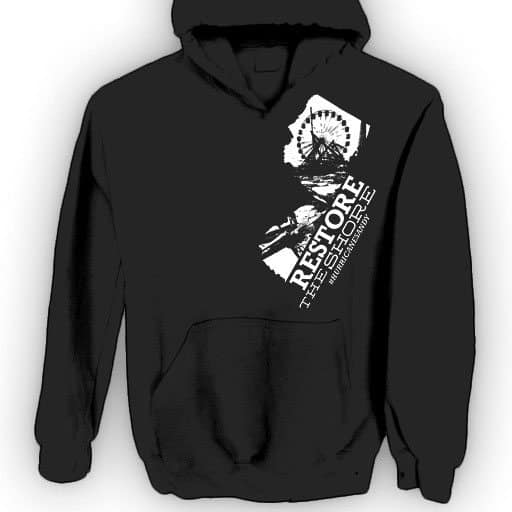 There is a pervasive concern of fraud when collecting funds for disaster relief, and crowdfunding is certainly subject to this.  However, portals are doing everything they can to ensure the sanctity of their offerings.  Many of those seeking donations make their contact information available on their offering pages, and portals have their own criteria for receiving donations as well.  For example, HelpersUnite requires victims to post a video outlining the damage and needs of the individual or family.  This is on top of verifying US citizenship or permanent residency.

Crowdfunding is establishing a niche in disaster relief while organizations like the Red Cross are coming under increasing scrutiny.  Some of those affected by the storm, including Staten Island Borough President James Molinaro, have been less than satisfied with the response.

I saw very few Red Cross workers, zero FEMA, but tons of neighbors and citizens helping each other out in Staten Island

The Red Cross has been scrutinized before for everything from the misallocation of funds to a lack of efficiency and oversight.  However, there are also numerous stories of the good they’re doing in the wake of Sandy.  The question is whether we lean too hard on these legacy organizations during crisis situations.

Crowdfunding is providing a valuable alternative and could provide a healthy separation of powers for future relief efforts.  Organizations like the Red Cross are often first on the scene of major disasters and can provide essential services in the short term, but crowdfunding can serve as a more direct way for victims to seek the monetary relief necessary for long-term stability.