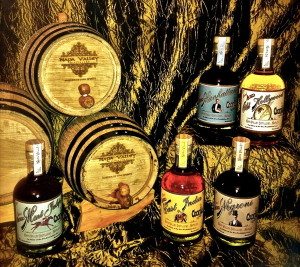 Napa Valley Distiller the maker of Napa Vodka Vintage Reserve launched their first crowdfunding campaign on Indiegogo.   The distiller is  a creator of award winning rare and unique craft spirits.  Their Vodka was named one of Wine Enthusiasts Top 50 Spirits.  As an added benefit 10% of all funds raised through the campaign will be donated to Susan G. Komen for the Cure.

The origins of Barrel-Aged cocktail making dates back to the early 1800’s. Due to the time and the tedious process to craft them, the practice eventually became a lost part of the American cocktail culture. Today, a few brave mixologists have started to revive this lost art form.

The micro-distillery’s founder, Arthur Hartunian says, “We’re not just recreating the classic cocktails by using the same ingredients, we’re reviving the exact process of manufacture as well. Barrel-Aging gives the cocktail a flavor and texture that no amount of shaking or stirring can. It’s really how cocktails were made and enjoyed nearly 200 years ago.”

Napa Valley Distillery will be releasing a total of 5 different Barrel-Aged cocktails, some of which are being bottled for the

first time ever. True cocktail connoisseurs can choose from such classics as the Mint Julep, Manhattan, Negroni and East India Cocktails as well as the company’s own Old Hollywood Cocktail, created exclusively for the series.

“The Old Hollywood’s base is made from our own premium Gin, but the rest is Hollywood confidential and very hush hush. You’ll have to get a bottle to find out. But, just one sip will take you back to late suppers at the Brown Derby on Hollywood and Vine,” jokes Hartunian.

Napa Valley Distillery handcrafts each cocktail in 10-gallon batches using their own award-winning craft spirits, cocktail bitters and all-natural ingredients. The mixture is allowed to age in mini oak barrels – the same used for premium whiskey – for up to 10 weeks before bottling. This barrel-aging process allows the ingredients to fully infuse and intensify, while the whole cocktail takes on the complex characteristics of the oak barrel. The end result is a smooth and very elegant cocktail reminisent of an era long gone by.

Following the crowd funding campaign, the bottled cocktails will be available through the company’s wholesale/retail distribution network. Products made or blended with spirits of fruit can also be purchased directly through the distillery.