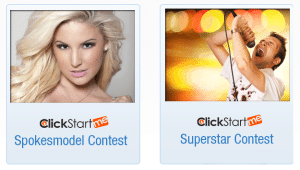 “The response to our Spokesmodel contest has been exciting involving models from every corner of the country who want a shot at the $5000 prize this May,” ClickStartMe founder Tess Hottenroth said. “Along with OneModelPlace, we decided to fly a photographer out also to join in on the fun at The Act and to shoot our spokesmodel finalists at some great Vegas locations.”

In order to be eligible for the contest, a photographer must be a member on OneModelPlace and create a crowdfunding project on ClickStartMe. Crowdfunding expert Kendall Almerico, CEO of ClickStartMe, has a few suggestions for photographers as to what they should crowdfund. “To get the traffic to their crowdfunding project, a smart photographer will pair up with a popular online model and cross-promote crowdfunding a photoshoot for the two of them,” Almerico says. “Between the model’s social network, and the photographer’s online followers, a lot of money could be raised for the project very quickly.”

Almerico also has other suggestions for photographers who want to join the contest. “You can crowdfund almost anything on ClickStartMe,” he says, “Raise money for a charity, start or grow a business, create or manufacture a product or invention or even raise funds for a personal cause such as new equipment or a website.”

According to the official rules on OneModelPlace, the winning photographer will be selected from finalists who receive the most number of “likes” on Facebook for their ClickStartMe project. The winner will receive roundtrip airfare and accommodations in Las Vegas and will be a member of the judging panel for the finals of ClickStartMe Spokesmodel Contest in The Act Las Vegas on May 17, 2013. In addition, the Photographer contest winner will photograph of the winner of ClickStartMe Spokesmodel contest on May 18, 2013. In addition, OneModelPlace is awarding a one year Platinum Plus Membership to the winner, and prizes for second and third places.

About One Model Place: OneModelPlace is an online community for models, photographers, and creative talents with nearly 200,000 active members. OneModelPlace started in 1997 and has grown to a thriving company with over 20 employees that design, program, and oversee the day-to-day activities on the site. OneModelPlace provides models, photographers and associated industries with the opportunity to create and maintain a powerful online presence regardless of a user’s technical skills, geographic location or experience