The Correspondent, an Amsterdam based start-up striving to launch a news site of quality news, has crowdfunded € 1 Million in 8 Days (approximately $1.3 Million).  As announced on the future news sites blog, More than 15,000 participants supported this crowdfunding event which was created by Rob Wijnberg, a Dutch journalist,  and Harald Dunnink, founder of Momkai.

The future long form news site is expected to launch in September of this year and is to be entirely advertisement free.  The founders were amazed at the overwhelming response by supporters.  The campaign still has 14 days remaining in the crowdfunding effort and stands today at 115% funded by over 17,000 individuals.

The Newspaper has created a “manifesto” for the site as follows: 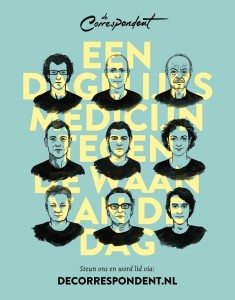 The traditional print industry has struggled over the past decade as the internet has disrupted their business model to an extreme degree with many large publications having financial challenges.  Many “newspapers” continue to derive the bulk of their revenue from traditional print advertising and subscriptions while attempting to grow their digital business.  Recently there has been a resurgence of “pure play” news sites which have leveraged the advantage of not having to struggle with legacy costs associated with traditional print operations.