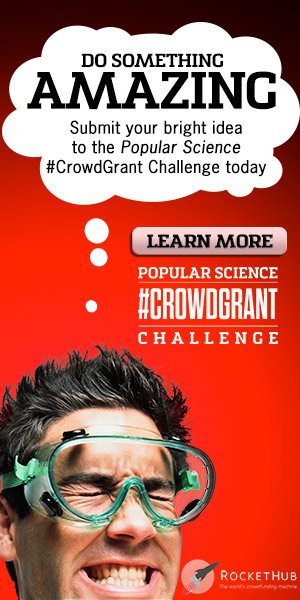 Crowdfunding site RocketHub has started a project with Popular Science to crowdfund their readers best ideas.  Popular Science has been around for a long time.  By their own records over 140 years having been founded in 1872 by Edward Youmans whose mission was to share the knowledge of science with the masses.  Having covered the wonders of science for oh so many years – they have now decided to do something more and become pro-active by crowdfunding their readers best ideas through their #CrowdGrant Challenge.

The initiative is accepting submissions now and will continue to accept new entries up to June 15th.  Editors from Popular Science and experts from RocketHub will review the entries and select the finalists.  The organizers are asking for projects which focus on technology, math, engineering and science (of course).

So if you are a little short on the funding for your cold fusion project this may be your chance.  Polish your pitch.  Fire up the video camera and submit your entry here on RocketHub.

And why not just hop over to RocketHub or another crowdfunding site and go directly to the masses?  From the pages of Popular Science;

Finally, you may ask what makes #CrowdGrant different than simply crowdfunding on your own. It’s a great question. Popular Science has served as a touchstone of science and technology for nearly a century and a half. That we’re hand-picking finalists is not insignificant—especially as we reach millions of monthly website visitors, millions of readers of the print magazine, and a rapidly growing number of tablet users. That’s a big draw. We also intend to promote finalists as widely and as deeply as we can.