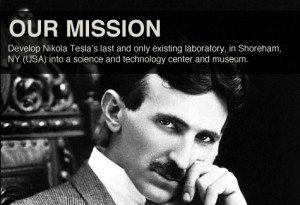 Friends of Science East, Inc., dba Tesla Science Center at Wardenclyffe, is pleased to announce that it has completed the purchase of the last remaining laboratory of scientist, visionary, and inventor Nikola Tesla in Shoreham, NY. The site was sold by Agfa Corporation, with headquarters in New Jersey.

The 15.69-acre laboratory site, known as Wardenclyffe, is where Tesla planned his wireless communications and energy transmission tower, in the early 1900s. He was never able to complete the construction of the tower due to lack of funds.

At the end of August 2012, Friends of Science East, Inc. partnered with online comic Matthew Inman (TheOatmeal.com) to hold an online crowdfunding campaign on Indiegogo.com in which they were able to raise $1.37 million towards saving the Wardenclyffe site. Over 33,000 people from 108 countries contributed to the success of the campaign, which reached the $1 million mark in just over a week.

“This is a major milestone in our almost two-decade effort to save this historically and scientifically significant site. We have

been pursuing this dream with confidence that we would eventually succeed,” said Gene Genova, Vice President of the organization. “We are very excited to be able to finally set foot on the grounds where Tesla walked and worked.”

“Now begin the next important steps in raising the money needed to restore the historic laboratory,” said Mary Daum, treasurer. “We estimate that we will need to raise about $10 million to create a science learning center and museum worthy of Tesla and his legacy. We invite everyone who believes in science education and in recognizing Tesla for his many contributions to society to join in helping to make this dream a reality.”

Tesla Science Center at Wardenclyffe is a 501 (c) 3 not-for-profit corporation in the state of New York, dedicated to saving and restoring Wardenclyffe, and transforming it into a science learning center and museum.