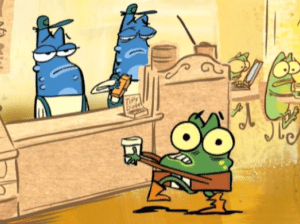 With the rise of Kickstarter, more and more people in the entertainment industry are turning to crowdfunding with the hope that the general public will be more receptive of their ideas than the executives that they usually work with. However, while it’s somewhat common to see a game developer or a movie director going it alone, independent from those executives, those who work in television don’t often have that luxury. That has been slow to change, even in the age of YouTube, but it is changing. Joe Murray, the creator of Rocko’s Modern Life, sought to get ahead of it a few years ago when he created a Kickstarter project for KaboingTV, a website with the purpose of fostering independent animation free from the shackles of conformity.

Sadly, while the project met its goal, only a few episodes of original content was ever created for the website. Despite its admirable intentions, it was never able to showcase the new spirit of animation that it saw on the horizon, but that hasn’t stopped others from trying. Frederator, the development studio that has worked on numerous Nickelodeon cartoons over the years, including the Cartoon Network show Adventure Time, launched Cartoon Hangover – an internet channel hosted on YouTube – to showcase some original short-form programming. It has been a success for them, and several new cartoons are scheduled to premiere on there this year.