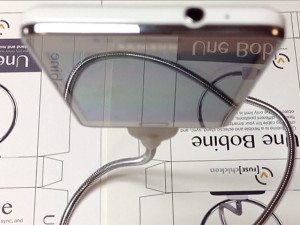 For Jon Fawcett, Kickstarter success came with an unusual soundtrack: an air horn.

The din started on May 7, 2012, the day Fawcett and his colleagues at Fuse Chicken, a four-person design outfit in Akron, Ohio, launched their first Kickstarter campaign. They were trying to raise funding for Une Bobine, a product of Fawcett’s design that stuffed an iPhone charging cable inside a metal gooseneck, allowing it to double as a flexible docking station and makeshift tripod. It was a simple, clever idea, and the team set out with the modest goal of raising $9,800 to put it into production.

In anticipation of their micro-windfall, the Fuse Chicken office prepared a ceremony of sorts. In the days leading up to the campaign, team members downloaded a slew of sound effects to their computers, with the idea that they’d play them in celebration whenever they received a new pledge. Fawcett’s sound effect was an air horn. Starting that Monday morning when the project launched, every time he’d get an email notification that a pledge was made, Fawcett would let the horn blast forth from his speakers. Then his co-founders would join in the fanfare with sounds of their own–a cacophonous, call-and-response ode to their crowdfunded success.