Until just recently, the category crowdfunded films and video held the crown of the most popular projects on Kickstarter but now crowdfunding games has usurped this position.  From the Kickstarter stats page games stand as follows:

Just under a 35% success rate.

The Film and Video Category: 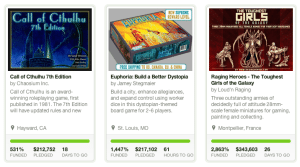 While these numbers may not be indicative of an over-riding trend it is notable to understand the over-all importance these two categories play for the Kickstarter platform.  Over 1/3 of the successful dollars crowdfunded on Kickstarter are from the Film/Video and Games genres.  Kickstarter has raised over $660 Million to date.

As the platform evolves and more competition arises with niche sites targeting these highly successful industries, it will be interesting to see if Kickstarter adjusts its approach to focus more energy on catering to the specific needs of  the sectors which generate the most revenue for their company.

Presently there are niche sites attempting to dislodge Kickstarter from their dominant position by providing specific, industry related functionality,  but as of yet none have quite captured the success generated by crowdfunding on Kickstarter.