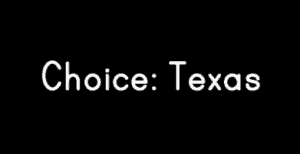 How can abortion rights in the state of Texas be the subject of a video game? Allyson Whipple and Carly Kocurek aim to answer that question with Choice: Texas, a video game seeking funding on Indiegogo.

The game is said to be digitally distributed for free and will be playable in the browser. It’s an interactive fiction game that seeks to convey their assertion that a woman’s right to choose should persist in the traditionally red state.

Although the game is based in fiction, the campaign page states that many of the socioeconomic concerns raised while playing are “based on extensive research into healthcare access, legal restrictions, geography, and demographics” and are “reflective of the real circumstances facing women in the state.”

The campaign is almost certain to be a lightning rod of controversy as it closes out its final two weeks of funding. The team has raised just over $8,000 of a $9,500 goal at the time of writing. The campaign is flexibly funded.

In a recent interview with Austin ABC affiliate KVUE, Whipple shares why the pair set out to bring the game to life.

“In theory, any woman can choose adoption or parenting or abortion. But quite frankly, that’s really not the case,” Whipple said. “We’ll have characters who live in very rural areas who are going to have to deal with getting time off from their jobs to travel to Austin or Houston or Dallas to get to a clinic. That’s definitely a reality that a lot of women are facing now.”

Watch the pitch video below for more info or head to the campaign page on Indiegogo.