Matter co-founder Bobbie Johnson took to Medium yesterday to share some thoughts on crowdfunding’s direction. This followed an appearance by Johnson at an event held by the Royal Society of Arts in London in which he participated on a panel discussing crowdfunding’s future with a specific nod to frameworks and regulations. (The full video of the panel is embedded below.)

Matter is an online publication that recently leveraged Kickstarter to the tune of $140,000. Shortly thereafter Matter sold to Medium, another disruptive online content platform. The sale led some to question whether Kickstarter was used with the best intentions of the backers in mind.

RELATED: Startups, Kickstarter, and the Price of Bullshit (That You Paid For!)

Regardless of the pundits’ view of the acquisition, Jonhson’s Medium post hits on one of the biggest (and most often misunderstood) benefits of crowdfunding: the positive effect on transparency and interaction with a business’s customers. 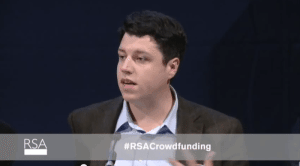 Where the focus tends to land on funding, the crowd can often be the most powerful part of the transaction – if the project creator chooses to allow the crowd to be an integral part of the campaign.

Everyone who contributes to a crowdfunding campaign owns a little bit of mindshare, and gets the ear of the project creator — even if they don’t actually own the product. For us, this allows us the opportunity to be far, far closer to our readership than most publishers are.

However, perhaps the most interesting quote from the article has to do with crowdfunding’s future…

More broadly, I argued, crowdfunding is clearly a powerful force, but it has to think about sustainability as much as stunts if it is to become more than a passing fad. And to that end, I think its long-term problems are largely social — how does it add lasting value to the world? — and not financial.