This is the 5th Kickstarter campaign the team at Mantic Games has run and it seems that have it down pat.  Their initial goal of crowdunding $50,000 was crushed on day one within minutes of launching.  As of today they are over $224,000 raised with more than four weeks to go.  The first stretch goal hit on day one too and since then, Mars Attack has quickly surpassed each sequential goal in a blur of crowdfunding. 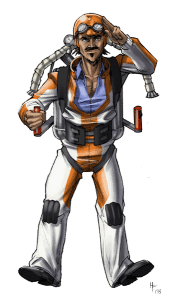 Mantic has been offering quality table top games since 2009.  Ronnie Rention is Mantic’s CEO and the inspiration behind these unique games.  Mantic also has produced noted games Dreadball and Deadzone.  Deadzone raised over $1.2 Million on Kickstarter earlier this year.  Dreadball crowdfunded $728,985 towards the end of 2012.  Kings of War – $354,997.  Loka – $104,172.  I guess you would say these guys are on a crowdfunding roll.

Mantic is also working with IDW Publishing to produce miniatures based on the popular Comic Book Series by John Layman and John McCrea, with further crossovers such as a Martian Dredd figure teased and an exclusive set of Topps Trading Cards which are a limited production run.