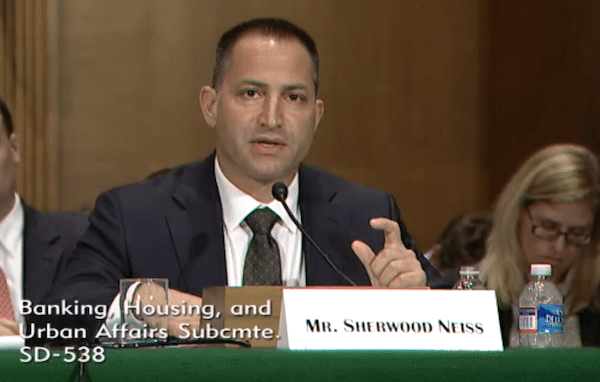 Sherwood Neiss, one of the leading figures in the crowdfunding industry, testified before the US Senate Committee on Banking, Housing and Urban Affairs today in which the merits and challenges of crowdfunding were reviewed.  Neiss, who is a founder of Crowdfund Capital Advisors as well as one of the creators of the legislation on crowdfunding, was joined by representatives from the NASAA, Rick Fleming, Robert Kaplan from Kaplan Voekler Cunningham & Frank and Alan Lewis from Natural Grocers by Vitamin Cottage.  An earlier panel included Keith Higgins from the SEC.  Each shared their unique perspectives and opinions on “The Jobs Act at a Year and A Half.

Neiss is clearly an advocate of the societal and economic benefits of crowdfunding.  As is typical to hearings like these, each witness submitted a statement prior to their presentation.  Committee members then queried the witnesses regarding the various aspects of the legislation, current regulator environment and suggestions for improvement.

Neiss’ testimony is embedded below in its entirety.  As part of the testimony it was interesting to hear his thoughts on the benefits of crowdfunding along with what the SEC got wrong – or really wrong – in their proposed regulations which were recently released in an over 500 page document.

1) It fills a void left by traditional financing and creates an efficient mechanism for raising money by standardizing and centralizing the process of private capital formation.

2) It is an efficient mechanism for investors to analyze if a company fits their portfolio strategy.

3) It disrupts the reliance on business angels and venture capitalist so that enterprising entrepreneurs can leapfrog the venture investor boardroom to their social network. It also provides validation from other investors, which may lower the risk for follow on investment.

4) It expands the geographic range of angel investment. Social networks demonstrate that investments need not be tied to geography, as are many VC investments. Crowdfunding allows entrepreneurs all over the country to have equal access to capital.

5) It provides product validation, support networks and partnerships.  Companies can use crowdfunding to explore a product’s viability and to engage early adopters at lower costs. This also provides campaigns and the companies hosting them exposure.

6) It provides market testing and demand measurement. Successfully funded projects show crowd validation. This validation, or lack thereof, can help determine if enough of a market exists to fund an idea or not.

7) It provides access to support networks. Crowdfund supporters that become investors are a highly motivated group that acts as product evangelists and feedback providers. These investors have skills and experience from which entrepreneurs can benefit.

8) It provides feedback on the market and how to move forward. Active investors may help enhance an issuer’s business plan with ideas and suggestions for moving forward.

When considering the 585-page report on the proposed rules put out by the SEC the following thoughts come to mind:

There are parts of the rulemaking that could make this offering less appealing to prospective issuers.  As mentioned above, the biggest hurdle issuers face will be compliance.  There is a lot of reporting required in the system. While such reporting will  promote transparency and deter fraud, it may also deter the honest yet new issuer from deciding to crowdfund. It may also force issuers to raise more  money to either pay for a compliance officer or an alternative solution. While  this may promote jobs, this was not the intent of the legislation.

Second while the legislation does allow for both accredited and unaccredited  investors to support issuers, accredited investors are not usually capped in their investment, within Regulation Crowdfunding, they are capped at $100,000.

Third there are disclosure requirements for directors and officers that include disclosing 3 years of business experience. While such disclosures may help investors understand who is running the company, depending on the number of owners, their backgrounds and the system used for gathering this information it might be challenging to disclose all this information.

Fourth, while the legislation mandates it, we were still hopeful that the SEC would understand the almost impracticality of audited financials for offerings in excess of $500,000. Audited financials are beneficial for large corporations to uncover nuances. Smaller corporations are more transparent by nature. According to the SEC’s figures an audit would cost about $28,700. Given the 2 year required disclosures in the proposed rules, this figure could be well over $50,000 or 10% of the raise. This might deter some issuers. We would hope in future amendments; this figure would be scaled up or just switched to CPA review.

Fifth, while FINRA is the only National Securities Association in the United States and hence assigned to be the oversight authority of the crowdfunding portals, I believe that the industry might be better served if it were overseen by the industry participants itself who are more concerned about developing an efficient, credible, transparent marketplace and building this credible crowdfunding marketplace is their only priority and core competence. Not knowing whether the SEC and FINRA are making rules to benefit brokers over funding portals might deter both intermediaries and issuers from getting into crowdfunding.

The proposed rules don’t allow funding portals much flexibility when determining who can list on their sites. Not giving them the flexibility to deny a business they believe isn’t ready for crowdfunding or won’t be successful may decrease efficiencies and increase failure.

The proposed rules leave liability with the funding portals for material misstatements by the issuers. While it would seem obvious that material misstatements should be a reason for liability, a portal is not in the same business as the issuer and hence might not know a statement is material. In addition, the roles and responsibilities of a funding portal are much less than that of a broker and while brokers may be paid to provide detailed vetting, portals are not.

In reality, under the proposed rules, funding portals have greater liability because the Due Diligence defense afforded to brokers is not afforded to them. When it comes to funding portals, it is the role of the crowd to do the diligence on the issuer and question the disclosures on the comment pages of the campaign. Funding portals should not be held accountable for misstatements.

As a matter of fact, funding portals should explicitly state on their websites that it is the job of the issuers to review the disclosures for nonfactual statements and that the portal is just providing the matching service. This was the intent of the legislation.  It is unclear from the proposed rules of funding portals can receive payment for a successful campaign in terms of a percent of the raise. This is how current donation and perks crowdfunding platforms operate and the intent of the legislation.

One part of the proposed rules talks about disclosing the amount of compensation paid to the intermediary for conducting the offering. Another part states the funding portal cannot compensate employees, agents or other person for such solicitation or based on the sale of securities displayed or referenced on its platform or portal. And a third part goes on to state the proposed rules would define “funding portal” consistent with the statutory definition of “funding portal,” substituting the word “broker” for the word “person,” seemingly implying that the intermediary cannot be paid a success fee. This would effectively remove the economic model for the intermediary.

The proposed rules also require the escrow agent for a funding portal to be a bank.  While escrow services are part of a bank’s duties it is not their primary focus of activity. By not allowing other escrow agents into the process, this makes it not only challenging for funding portals to develop and flourish but increases the cost of capital for the issuer.

The reality of these four items, I believe, will make it very hard for funding portals to succeed in the space. Anyone that wants to be a funding portal will have to form a strategic relationship with a broker. Doing so might allow them to perform more activities but the funding portals will probably have to give up an excessive amount of their fees with the broker. Unfortunately the additional costs of capital will come out of what issuers raise and not where investors want their investment going.

The reality for an issuer is also fairly stark. In my calculations and conversations with Kevin Laws at AngelList we both came to the same conclusion, crowdfunding might be too expensive from a prepare and comply point of view to event get in the game at the low end. Karen Kerrigan, President and CEO of the Small Business &

Entrepreneurship Council (SBE Council) stated it another way, “the rules as proposed will prevent or turn off many small businesses and entrepreneurs with limited resources from tapping into this new financing opportunity.” Quite simply, at least at present, SBE Council believes the regulations work against the efficiency and transparency of technology in this space.

“The complexity and burden of the SEC’s proposed regulations, FINRA requirements, and the potential threat to regulate even more will act as a barrier to entry to new funding portals, which means less innovation and competition,” says

Kerrigan. “We are not opposed to regulation and accountability, but SEC Title III rules tip the scales, which create immediate barriers to funding portal competition and choice for entrepreneurs in this new space.”

In sum, the potential for equity and debt-based crowdfunding will be constrained by the proposed regulations (as they now stand) to implement Title III of the JOBS Act. Entrepreneurs who have the resources to comply with the various requirements at 16 each step of their funding (pre, during and post raise) will be fine. Small business owners and entrepreneurs with limited resources will have more difficulty tapping into this opportunity.