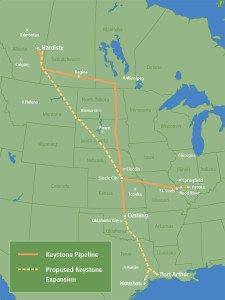 TransCanada and its American subsidiary, Keystone, are in the midst of seeking approval for a new pipeline to run from Alberta’s tar sands to refineries on the Gulf Coast. Called the Keystone XL pipeline, it is a highly controversial project that has its passionate supporters and vehement critics.

Julia Trigg Crawford has been at the center of the battle against the pipeline ever since her farmland was condemned and a lease awarded to TransCanada. She was profiled in a New York Times piece in May of 2012. She has been fighting TransCanada for her right to her land ever since.

The Keystone XL pipeline still hasn’t been approved by the United States government, but Alberta Premier Alison Redford does think an approval could be in the cards for 2014. She recently told the Globe and Mail that she sees “encouraging political signs” coming from Washington. She has been active in lobbying efforts for approval of the pipeline.

Crawford has appealed twice now to no avail. She now intends on taking the case to the Texas Supreme Court and is soliciting donations to the Crawford Defense Fund on PayPal for the effort.

As shown by the Denbury case, the Texas Supreme Court has demonstrated great courage and willingness to overturn lower courts’ decisions to protect Texas citizens from abuse of eminent domain laws by private corporations. We will continue our fight because the Keystone XL pipeline is all risk and no reward for my family and those Texans like us.Julia Trigg Crawford

The family plans to challenge TransCanada’s status as a common carrier, which is key to their claim to eminent domain in the building of the Keystone XL pipeline. This case could be pivotal in determining what rights private citizens in Texas have to their land if they are indeed in the path of the proposed pipeline.

More information on the Crawford family’s defense fund is available at nacstop.org.