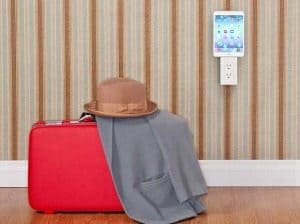 The thingCHARGER is currently crowdfunding on Indiegogo and it is on an absolute roll. The device has crossed the half-million dollar threshold with a week left in the campaign.

So why is the device doing so well? As with so many hardware items in the crowdfunding world, it solves a serious pain for many smartphone and tablet owners. The thingCHARGER is essentially an extension for a typical electrical outlet with some built-in goodies. It has two USB chargers on the bottom, and the top accepts one of three extensions clipped into the back of the outlet: mini USB, micro USB and a 30-pin apple connector. (Lightning connectors will run an additional $9 per.)

So, with one device plugged into the wall the user can charge two devices via USB cable, one device attached to the top connector and still have access to both wall sockets.

Perhaps most importantly, the device uses no power when not in use. There is a small LED-lit power button on the side of the device, so when the user is done charging they can hit the button to save energy. It’s said to be “green by design.”

The campaign was seeking $25,000 in funding. To date they’ve raised just short of $550,000 with 7 days left in the campaign. It was a flexible funding campaign, but I don’t think they’ll be needing to worry about not hitting their funding goal!