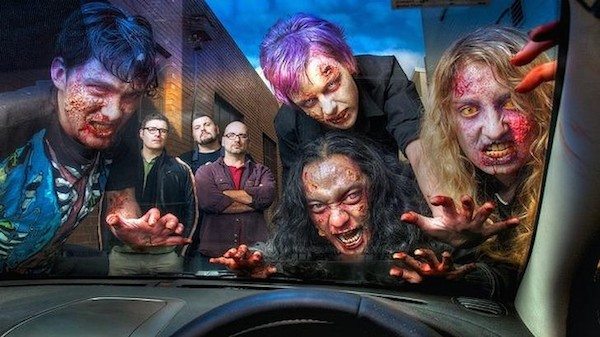 Australian entrepreneurs and IRL Shooter founders Drew Hobbs and David Leadbetter, who are behind real-life video game “Lazarus,” not only received their $308k crowdfunding campaign goal on Pozible, but also broke a new record on the platform. The campaign received $359k by 1,517 Melburians. 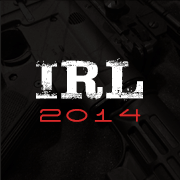 According to the campaing’s site, “Lazarus” is about a facility that is under lock down and the government has started to take action to ensure no possible outbreak occurs. The player’s objective is to follow the orders of your unknown employer to escort and protect your assigned communication officer through the building. Your secondary objection is to covertly breach the sub-levels, recovering or destroying high value targets and intelligence, while surviving the brutal onslaught of mutation.

Making its way to Melbourne this October, RL Shooter’s “Lazarus” is an all new game with more horror, more scares, more action and more gore than ever before. This is a fully immersive, visceral gaming experience, all in real life. Players arm themselves with laser weapon and enter the facility to destroy the living dead.

Hobbs and Leadbetter note that this is not a zombie version of paintball. They have designed a more sophisticated, physically and mentally challenging game. Hobbs described the game as a “live action combat horror experience.” 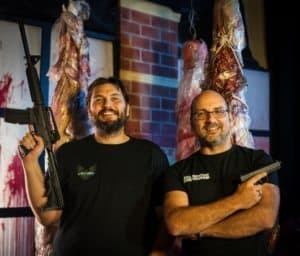 Sharing what really caused “Lazarus” to break the crowdfunding platform’s record, Hobb stated he believes the pain belt, that was offered to backers, was the big factor. “It makes it seriously immersive. In the last game, you registered damage as a number on your meter. You didn’t have any actual feedback. Now you’ll get some short but powerful electric shocks.”

The belt is an optional extra and slides over the player’s lower torso. Each player will select their desired level of discomfort. Hobbs notes the 0.2-second shock will feel like a gentle jab in the ribs and the maximum 0.8-second shock delivers “some serious pain.” Either getting shot or being close to a “zombie” will set it off.

Also revealing what inspired him and Leadbetter to create the game, Hobb added, “There’s a thing in the UK where you go into a shopping mall and shoot zombies with soft pellet guns. That sounds absolutely rad. But we wanted to do something that involved a story, that was more like ‘Mass Effect,’ when you’ve got people to save you, you can murder, and you can let the zombies eat them. It’s a hard sell to go into a back and ask for a start-up loan for that though.”

“Lazarus” is set to open on Friday, October 3rd and the season will run on Friday nights, all Saturday & Sunday for 8 weeks.