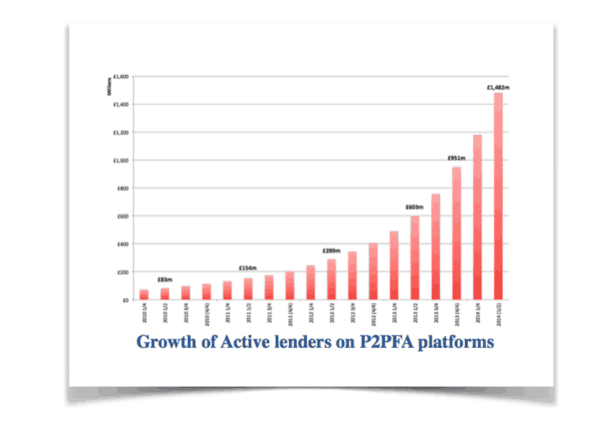 The Peer to Peer Finance Association (P2PFA) in the UK have just published the data for the first 6 months of 2014 showing impressive growth in the P2P lending industry.  The rate of flow of funds through p2p platforms has doubled over the last 6 months.  New lending increased from £247.4 million in Q1 to £272.7 million in Q2. 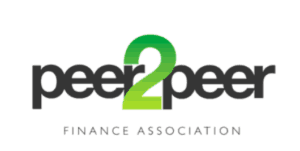 According to the data compiled by P2PFA members, lenders have lent over £500 million in the first half of 2014 carving a path to lend over £ 1 billion for the year – an important milestone for the young industry.  The P2PFA states that lending for businesses continues to rise faster than consumer lending and is heading towards parity for the year.

P2P lending has become a competitive alternative to the traditional banking industry that largely continues to operate in a consistent fashion that has opened up the industry for disruption.  P2P is described as “a modern, friendly, fast process that benefits both lenders and borrowers”. 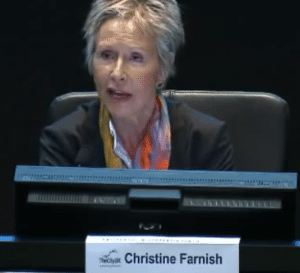 Christine Farnish, Chair of the P2PFA, commented on the just released data;

“Peer to peer lending is consolidating its position as a good value and reliable form of funding for credit worthy consumers and small businesses, and more and more consumers are turning to p2p lending as a good way of putting their spare cash to work. As we continue to grow we are committed to maintaining the highest standards of business conduct and are working with the FCA to ensure a smooth transition to statutory regulation.”

At the end of 2013 Nesta reported estimates on the P2P lending industry showing P2P (consumer) stood at £287 million for the year.   The P2B category came in at £193 million for a total industry amount of £480.  This amount has already been hurdled for 2014.  Nesta predicted that 2014 will deliver a total of £1.6 billion in alternative finance in the United Kingdom.  At least one 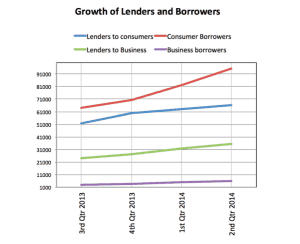 The P2P industry in the UK is expected to experience a significant boost as the assets will soon be allowed in ISAs or NISAs – tax exempt retirement accounts.  The light touch regulatory approach of the FCA has helped boost the industry which is seen as a compelling catalyst for UK economic growth.  The British Business Bank has recently announced a program of partnership with several P2P platforms in a push to get finance to small enterprises.