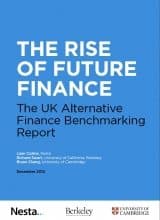 Nesta, a UK based charity which strives to support the best and brightest ideas by providing grants and doing research, has published a report on the “Rise of Future Finance”.  This is a first ever survey covering the field of alternative finance which includes Peer-to-Peer crowdfunding and equity crowdfunding platforms.  The report recognizes the disruptive nature of crowdfunding and the growing disintermediation of traditional sources of capital formation.  It is estimated that in 2013 over 647,000 projects were fully funded via alternative finance intermediaries.

Key findings from the report include:

The United Kingdom has been at the forefront of the growing investment crowdfunding industry – both in the debt and equity sectors.  The 91% growth stated above is an attempt to include all the diverse variants of crowdfunding.   In 2013 it was estimated that  £332 Million of SME financing was provided by alternative finance intermediaries.

Nesta states, “We can cautiously predicate that the UK alternative finance market will grow to £1.6 billion next year and provide £840m worth of business finance for start-ups and SMEs in 2014”. 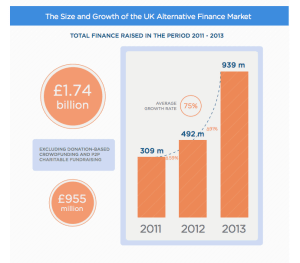 The Nesta report was authored by Liam Collins, Richard Swart and Bryan Zhang.  Collins is a Policy Advisor and is the co-author on four Nesta reports on the investment crowdfunding industry.  Richard Swart is PhD and Director of Research, Program for Innovation in Entrepreneurial Finance a the University of California, Berkeley.  Zhang is a PhD Researcher in crowdfunding and alternative finance at the University of Cambridge.

The breakdown of the various crowdfunding categories and amounts raised for 2013 are below;