Less than one day until its crowdfunding campaign on Indiegogo closes, new film Batkid Begins scores its initial $100,000 goal and raised $105,551 from close to 1,000 backers. 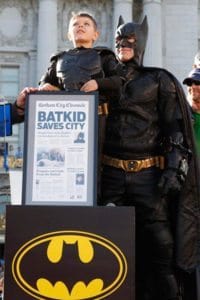 As previously reported, the project is describe as “a feature documentary that explores how Batkid became a phenomenon in San Francisco and worldwide.” The film takes viewers “behind the scenes” of the day Batkid saved Gotham City.

Per the synopsis, Batkid Begins follows the events leading up to the day Batkid saved San Francisco and what happens when an event goes unintentionally viral. The goal that day was to get a couple hundred people to show up to support Miles Scott and his wish to become Batkid, after battling leukemia for more than half his short life.

The thought was a crowd of 200 would seem huge to a five year old boy, but what happened next blew everyone’s minds. Support for the idea of granting Miles’s wish kept pouring in and soon it was clear that the crowd would be much bigger than the modest expectations.

Instead of a few hundred, 25,000 people lined the streets to cheer Miles on as he saved Gotham. The superhero spirit spilled onto the Internet as news of Batkid’s heroics reached over 2 billion people, touching hearts around the world. Batkid was impossible to miss that day as we were glued to our computers, phones, and in San Francisco, our office windows trying to be a part of the celebration. 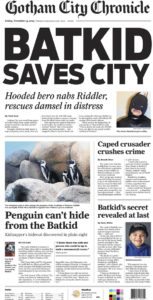 Explaining his son’s keen interest in the Dark Knight, Miles’ father, Nick Scott, stated, “One of his doctors told us that with this disease they become like a fighter. I think he sees the good versus evil battle in superheroes and just relates to it.”

The film team also added, “To make Batkid Begins worthy of its superhero namesake, we’re teaming up with the big name musicians, animators, and visual effects professionals, all working at a reduced rate in the name of Batkid, and bringing the post-production price tag to $100,000. It took thousands of people to make Batkid’s day magical, and we want to give everyone who was touched a chance to be a part of this project.”

They then added, “The spirit of generosity, of positivity, of saying ‘Yes!’ to an unlikely superhero, is what we’ve tried to capture in this film and what will live if we succeed in this campaign.”

All funds from the campaign will go towards the following: