Hawaii residents Don Murphy, Raymond Noh, and Kurt Osaski have launched a brand new crowdfunding platform called We Get ‘Em to raise funds for the University of Hawaii Athletics Department. This website debut comes after the department revealed it was facing a $3million budget cut last month. 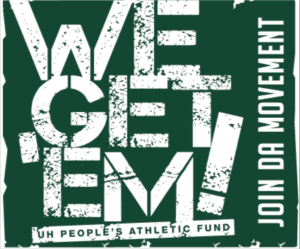 During a recent interview, Osaski stated, “What we’re looking at is not only the numbers in how much is given, but also how many people participate. Whether you can give a dollar or $1,000 we want people to be apart of it.

“We Get ‘Em is about the power of the people, a grassroots effort that will mobilize individuals, communities, and an entire state to be part of a growing movement to support the University of Hawaii Athletics program. Every gift counts! And all proceeds will be used directly for the benefit of UH Athletics.”

Noh added, “UH fans have immense pride! Upon hearing of the financial challenges that UH Athletic Department is facing, supporters throughout the state were looking for ways they could personally help the situation. 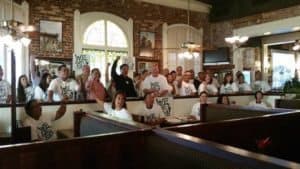 As of Friday morning, the platform has raised over $4,000 thanks to its nearly 65 donors.  All net proceeds from the We Get ‘Em campaign will be given to the Ahahui Koa Anuenue, the designation fundraising entity for the UH Athletic Department.

“We’ve seen an unbelievable response so far from the community,” Murphy explained. “Just this morning we recieved a generous donation from someone who heard our press conference on ESPN 1420. Please join us in supporting UH Athletics and let our UH student athletes know how proud we are of their efforts.”

All donations will be received by aio Foundation, a nonprofit organization that is dedicated to providing programs which build health, education and welfare for Hawaii youths.