The 1970 NYC Transit Authority Graphics Standards Manual, by Unimark’s Massimo Vignelli and Bob Noorda, is being 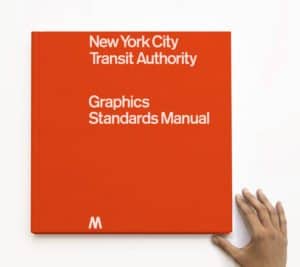 reissued in January 2015 as a full-size book. Licensed exclusively from the MTA and available only through Kickstarter, the NYC MTA Graphics Standards Manual will not again be printed or available anywhere else.  Created by Pentagram designers Jesse Reed and Hamish Smyth and dedicated to Massimo Vignelli, Bob Noorda, and the Unimark staff, the smart Kickstarter campaign has swiftly raised over $411K with the help of over 3,600 backers, quickly surpassing the initial $108K goal in just two days.

Why Kickstarter? “After we discovered the Standards Manual and created the website thestandardsmanual.com, we sent it to a few friends and colleagues who we thought would enjoy it. Within 72 hours, the website was a viral hit with a quarter of a million unique views. But seeing the Standards Manual on screen didn’t do it justice. We realized that the only way to truly experience the Standards Manual was full-size in print. We thought there was no better way to share this piece of design history with you than on Kickstarter.  Independently producing the book on Kickstarter allows us to control the production of the book closely, distribute it faster, and keep the cost lower.” 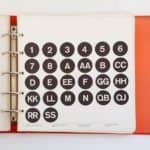 “If you found yourself in the New York City subway in the 1960s, you were probably lost. Signs didn’t help you find your way, standards didn’t exist, even handmade lettering was common. Mass confusion was the status quo. In 1970, the Standards Manual changed everything.”

In 2012, 42 years after the Standards Manual was released, folks discovered a rare copy in the basement of the hallowed design firm Pentagram. 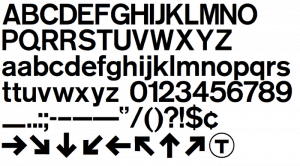 “The reissue cover, introduction, and essay headings will be set in a custom version of Standard Medium by type designer Nick Sherman,” shares the campaign. “Sherman painstakingly recreated the font from the photographs we posted on thestandardsmanual.com and has allowed us to use it in the reissue. We are not altering the scans of the original Standards Manual in any way. We are only typesetting the cover, introduction, and essay in Nick’s version of the font.”

Michael Bierut, now a Partner at the international design consultancy Pentagram, joined Pentagram in 1990 in the 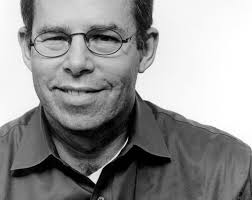 firm’s New York office. He also worked for ten years under Massimo Vignelli at Vignelli Associates, ultimately as vice president of graphic design. Bierut is a senior design critic at the Yale School of Art, co-editor of the anthology series Looking Closer: Critical Writings on Graphic Design, published by Allworth Press, and in 1998 he co-edited and designed the monograph Tibor Kalman: Perverse Optimist. He is a co-founder of the weblog Design Observer and his commentaries about graphic design in everyday life can be heard nationally on the Public Radio International program “Studio 360.” His book Seventy-nine Short Essays on Design was published by Princeton Architectural Press in 2007. In short, the book is a well-curated masterpiece. Chris Bonanos, a staff writer at New York magazine and is the author of Instant: The Story of Polaroid, will write a 5000+ word essay on the history of the Standards Manual, including illustrations, interviews with people who worked on the successions to the Standards Manual, and MTA staff. 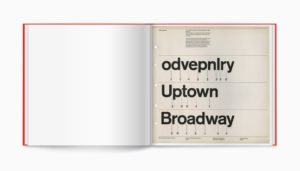 Backer rewards include: underground access for $3 (!), The Standards Manual reissue for $98 pledges, and graduated pledge amounts to cover overseas shipping.

In case readers miss the campaign, they may still be able to peruse the Manual reissue at the New York Transit Museum for storage and preservation.  The campaign ends on Fri, Oct 10 2014 4:00 PM EDT.  Be sure to watch the campaign video below by Harrison Boyce with music by Edo Van Breemen.