American Homeowner Preservation (“AHP”) reached a milestone this week by helping its 500th borrower stay in their home and avoid foreclosure with a loan modification. To counter the devastation of the housing collapse, recession and foreclosure crisis, AHP crafted a socially-conscious business model that aims to get borrowers back on track with affordable payments and discounted principal in order to rebuild communities while providing above-market returns to investors. Using equity crowdfunding to purchase pools of nonperforming mortgages, AHP is able to extinguish significant debts for struggling borrowers and work with them in ways that many banks and lenders have proven incapable of doing.

Many of the mortgages AHP purchases are secured by properties in low- and moderate-income communities. While the foreclosure crisis may seemingly be over to most, AHP recognizes that borrowers in more modest neighborhoods are still fighting to save their homes and dealing with the ongoing impacts of the recession, such as long-term unemployment. AHP does not give handouts to borrowers. Rather, discounts realized in the purchase of mortgages are shared with borrowers to alleviate sometimes insurmountable debt.

AHP oftentimes contacts borrowers after performing loan modifications to learn more about what led to their default of payment and how the modifications impact their lives. In working with Beth, a 69-year-old retired nurse who relies on social security to pay her bills, AHP discovered how dire her situation was. When Beth’s daughter was diagnosed with cancer in 2010, Beth became her primary caretaker and her mortgage payments eventually became unmanageable. 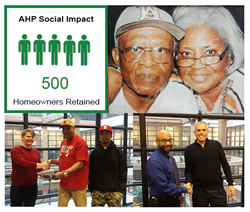 Annie Roscoe, an AHP borrower, lives in Alabama with her husband. Annie’s husband has lived in their home since his birth, more than 70 years ago. In 2002, Annie’s husband suffered a series of strokes and used money from his retirement plan to catch up on hospital bills and his mortgage payments. Yet after catching up on their mortgage, the Roscoes’ loan was sold and they did not know where to send payments. After years of accruing delinquent charges, Annie and her husband were faced with the possibility of losing their home.

When Annie thought she had exhausted all her resources and she and her husband would lose their home, she received a letter in the mail stating AHP had purchased her loan. AHP was able to settle the Roscoes’ years of delinquent payments for $2,000 and drop their monthly payments to a very affordable $250.

“It made me so happy to know that there is somebody out there to help people that are trying to keep their homes, because so many people don’t care,” Annie said. “People shouldn’t have to lose their homes because of companies that want to take advantage of them, it’s just not fair. I wish other people could have had a chance to keep their homes.”