Seeking to make changes to the old, unsafe, rather scary Massachusetts Bay Transportation Authority’s subway system, a Boston area resident has launched a $300M crowdfunding initiative on GoFundMe to help bring the transit into the 21st century. 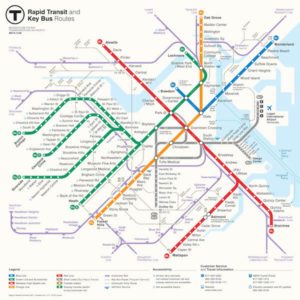 Explaining the situation (jokingly), campaign organizer, Janssen McCormick writes,”The MBTA is outmoded, unsafe and incapable of withstanding the rigors of New England winters. When one link in its corroded chain breaks the whole system is thrown into disarray, when multiple links break at once the entire city and region collapses into massive gridlock. Trains are kept decades beyond their service life because for decades nobody in state government wanted to take responsibility to fund maintenance and modernization of public transit.

“So here’s where you come in. If the internet can help one working class guy in Detroit who struggles every day to get to work surely we can help the hundreds of thousands of working class people in Boston who rely on the decrepit MBTA to get them to work, school, doctors appointments or the grocery store.”

The campaign’s rewards (although very unrealistic) include: 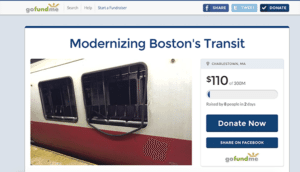 Although it hasn’t raised much funds as of yet, one commentator had something to say about the project and even offered to give a more realistic approach to the situation. “Isn’t it great that we must resort to begging to fund our infrastructure? If you’re fed up, please sign this petition to TELL THE LEGISLATURE that *they* should do their jobs and raise the revenue — yes, from taxpayers, because we don’t get nice things free — needed to upgrade the MBTA and invest in it for our future needs.”

Maybe, if it receives more attention, the GoFundMe project might raise just enough to get noticed.