Today EBS Technologies launched the crowdfunding campaign on Companisto, already surpassing 22,710€ of its minimum 100,000€ goal with the help of over 60 backers. The innovative tech company is valued at 6,800,000 €.

Already backed by three major investors, namely the German venture capital company Earlybird, the High-Tech Gründerfonds (high-tech start-up fund), and the investment bank of the federal state of Brandenburg (ILB), EBS  have already has 8 million euros in its coffer. These three investors plan to keep financing EBS until it reaches breakeven point, according to the campaign.

“Each year, approximately 144,000 people in Germany suffer from a stroke that causes an impairment or a loss of vision. Another 120,000 people develop glaucoma each year, and 53,000 people lose their vision because of traumatic brain injuries. Patients experience such visual impairments as black dots, white dots, or extremely blurred vision among other things,” stated the campaign. “Thus far, only very few of these people could hope that their vision would ever improve again. For a long time, the scientific consensus was that malfunctions of the central visual organ are irreversible. A death of neurons was considered the main reason for visual impairments, so only a very limited number of therapy options were available.” 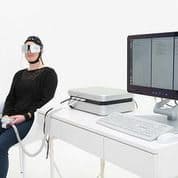 EBS’s NEW WAVE aims to provide hope for the visually impaired, by a method confirmed by clinical trials and practice.  This therapy method intends to reactivate the surviving but inactive neurons of a patient through alternative current pulses and to reintegrate these neurons into a working neural network (neural synchronization). In so doing, the method takes advantage of the ability of neurons to adapt to changed circumstances (neuroplasticity). In addition to neuroplasticity, alternating current stimulation also has a protective effect on neurons, which may slow down or even prevent t he death of additional neurons in many cases.Today, it is considered a scientific fact that not all types of visual impairments are due to the death of neurons; other causes may be the inactivity of neurons or a lack of synchronization between neurons in the brain areas relevant to visual perception. In the context of a registration trial, the NEXT WAVE stimulation method was tested on patients that had not benefited from conventional therapy methods before. With an average vision improvement of 24%, the patients treated exhibited a significant improvement of the entire visual field.  EBS’s campaign closes in 59 days.